One was a soldier from Ames, Robert Duaine Peterson, who died in the Korean War.

Former students are eligible for name placement in Gold Star Hall if they graduated from or attended Iowa State full time for one or more semesters, and died while in military service in a war zone. As names become known, they are added to the wall and the soldiers are remembered in the Gold Star Hall Ceremony on Veterans Day.

Growing up in Ames

Peterson was born Sept. 17, 1925, in Lake Mills to Wilmer and Ella -- the fourth of five children. They had three daughters, and another was born eight years later. When Wilmer found a job with the Post Office, the close-knit family of seven moved to Ames in 1931.

Peterson attended Roosevelt Elementary School, Central Junior High and Ames High School, where he played basketball and cornet, and was junior class president. He earned mostly average grades, with As in spelling and art.

In 1942, Wilmer Peterson died, leaving Ella with four children still at home. She went to work as a seamstress with Collegiate Manufacturing.

The following year, Peterson -- a high school senior -- lettered in basketball, playing forward on the team that won the State District Basketball Tournament. And he enlisted in the Reserve Corps of the Army with his close friend, Milton. He was 17. Three months later, he graduated and found a summer job as a messenger at Paramount Studios in Hollywood.

Shortly after his 18th birthday in September, Peterson entered the Army Air Corps and was sent to Sheppard Field, Texas. Throughout his training, he kept a diary, detailing his experiences - from the tough physical training and flying lessons to the food and movies. In December he started an officers' training program in Oklahoma. Outside of classes, he played basketball and watched movies. Peterson's diary entries noted 55 movies viewed between December 1943 and August 1944.

Although eager to learn when he started flying lessons, Peterson found manning the controls to be stressful. He became a bombardier rather than a pilot. In March 1944, he started a series of trainings in Texas: Nine weeks at bombardier-navigator pre-flight school, seven weeks of gunnery training and 18 weeks in advanced bombardier school. Upon graduation in November 1944, he was commissioned a second lieutenant with 197 flying hours. He was in the 56th fighter group, the highest scoring P47 Thunderbolt group in the 2nd bombardment division. Peterson had completed one of the most rigid courses in the Air Force Training Command. But the war ended before Peterson received an overseas assignment, and he was honorably discharged in October 1945. 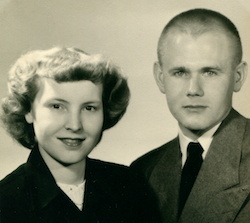 Peterson and Milton, his close friend from Ames, attended Iowa State and pledged Beta Theta Pi fraternity together. They later transferred to the University of Iowa, where they were inseparable - until Peterson met Mary Jane in October 1947. They married in April 1948, and lived in Iowa City that spring while Peterson finished his degree in economics. Following graduation, the couple moved to Clear Lake, where he worked as a field representative for General Motors Acceptance Corp. In November 1949, they became parents to daughter Dana Lynn. A few weeks later, Peterson applied for extended active duty with the U.S. Air Force. He was recalled to train for Korea in the summer of 1950 and left for the war in August 1951. 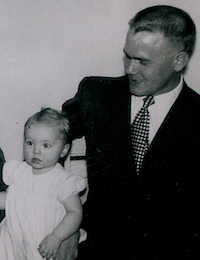 Peterson sent home detailed letters to his wife and baby daughter. On Sept. 3, he wrote: "We flew our first combat mission. It took 10 ½ hours. Our target was the Chonju marshaling yards in northern Korea. … There was flak - it's quite a strain and right now, I'm pooped.

"It also makes me feel kind of funny and maybe a little guilty to think of the damage and destruction and misery those bombs cause on the ground …What I'm doing here sitting in a tent, eating bad food and risking my life in such a useless war is beyond me. Maybe it has a purpose that I don't see.

"Anyway, I'm here and I've got my work cut out for me for the next few months so I'll make the best of it. Time will go fast and I'll soon be back with you and Dana."

Two days later he wrote. "We're working our tails off. This is the fourth time we will have flown in the last five days and we worked from 7 a.m. to 8 p.m. on the ground today."

His last letter was written just a week later on Sept. 12, 1951, shortly before he left on another night mission -- this time in support of frontline troops. On the return trip, Peterson's B 29 ran low on fuel and one engine was out, so the pilot decided to land at K-2 Airfield in South Korea, not their usual field. At about 4 a.m. on Sept. 13, while attempting an emergency landing in the dark, the plane hit a mountain. The entire crew died. It was just four days short of Peterson's 26th birthday. He had been in Korea scarcely two weeks.

Following his funeral in Ames, Peterson was buried near Lake Mills with military honors. He received the WW II Victory Medal, Korean War and United Nations Service Medals, a Purple Heart, and an Accolade signed by President Harry Truman.

A tribute from Korean president

In 2000, on the 50th anniversary of the outbreak of the Korean War, Mary Jane Peterson received a letter from the president of the Republic of Korea, Kim Dae-jung:

"I would like to offer my deepest gratitude for your noble contribution to the efforts to safeguard the Republic of Korea and uphold democracy around the world. At the same time, I remember with endless respect and affection those who sacrificed their lives for that cause.

"We Koreans hold dear in our hearts the conviction, courage and spirit of sacrifice shown to us by such selfless friends as you, who enabled us to remain a free democratic nation. The ideals of democracy have become universal values in this new century and millennium. Half a century after the Korean War, we honor you and reaffirm our friendship which helped to forge the blood alliance between our two countries." 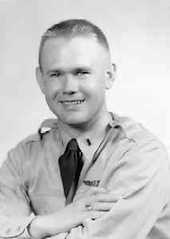 "We flew our first combat mission. It took 10 ½ hours. Our target was the Chonju marshaling yards in northern Korea. … There was flak - it's quite a strain and right now, I'm pooped."