AMES, Iowa -- Pedro Sanchez, 2002 World Food Prize laureate, will present the 10th Norman Borlaug Lecture at Iowa State University on Monday, Oct. 10. His talk, "The African Green Revolution Moves Forward," will be at 8 p.m. in the Memorial Union Great Hall. A reception and student poster display on world food issues will precede the lecture at 7 p.m. in the Memorial Union Oak Room. Both events are free and open to the public.

Sanchez is director of the Earth Institute's tropical agriculture program at Columbia University. An international leader in the fight against hunger, Sanchez pioneered the use of agroforestry to restore fertility to some of the world's poorest and most degraded soils. He co-led the United Nations Millennium Project's Task Force on Hunger with fellow World Food Prize laureate M.S. Swaminathan. In 2004, he won the MacArthur Foundation's "Genius Award" in honor of his many achievements in expanding food supplies and improving ecological conditions in developing countries around the world.

Sanchez grew up on his family's farm in Cuba and studied agriculture at Cornell University from 1958-68, earning undergraduate and graduate degrees in agronomy and soil science. From 1968 to 1991, he was on the faculty at North Carolina State University. His impact on international agriculture was immediate: by 1971, his research team in Peru helped the nation achieve self-sufficiency in rice and produce among the highest yields in the world. Becoming increasingly interested in tropical soils, Sanchez worked in Brazil to develop a vast area of non-productive land by reducing the soil acidity through soil amendment and fertilizer technologies. More than 30 million hectares of land came into production, yields increased by 60 percent, grain harvests tripled and soybean production grew to match that of the U.S.

In the 1980s, Sanchez expanded his work into Asia and Africa with a focus on the potential of agroforestry to improve productivity and long-term ecological stability. In 1991, he became director general of the International Center for Research in Agroforestry in Kenya, conducting research to develop low-cost and comprehensive soil rejuvenation programs for eastern and southern Africa. He developed an innovative approach that was adopted by more than 400,000 farmers in more than 20 countries who were able to increase yields by as much as 400 percent and prevent extreme food deprivation.

The Norman Borlaug annual lecture is named for the Cresco, Iowa, native and agronomist whose discoveries sparked the Green Revolution. Borlaug received the Nobel Peace Prize for his international work in wheat research and production, which has saved millions of lives. He is the founder of the World Food Prize, which annually recognizes the achievements of individuals who have advanced human development by improving the quality, quantity or availability of food in the world. In conjunction with the annual World Food Prize Celebration, the Borlaug lecture is coordinated by Iowa State University's Nutritional Sciences Council and cosponsored by the University Committee on Lectures (funded by the Government of the Student Body). Additional cosponsors for this year's speaker include the Live Green! Sustainability Series, Plant Sciences Institute and World Affairs Series. More information on ISU lectures is available at http://www.lectures.iastate.edu, or by calling 515-294-9935. 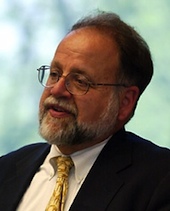 Both events are free and open to the public.