AMES, Iowa - Iowa State University will host the Fiscal Solutions Tour on Thursday, Sept. 29. The discussion, which features talks by a former United States comptroller general and the director of a nonpartisan organization dedicated to fiscal responsibility, will be at 7 p.m. in the Memorial Union Sun Room. Iowa State Executive Vice President and Provost Elizabeth Hoffman will moderate the discussion. It is free and open to the public.

Walker was U.S. comptroller general until 2008, one of his three presidential appointments. He then served as president and CEO of the Peter G. Peterson Foundation, working to promote federal financial responsibility. In 2010, Walker became president and CEO of the Comeback America Initiative focused on promoting and achieving specific fiscal solutions. He is the author of the book, "Comeback America: Turning the Country Around and Restoring Fiscal Responsibility."

Bixby is executive director of the nonprofit Concord Coalition, a nonpartisan, grassroots organization advocating responsible fiscal policy. Prior to his work with the Concord Coalition, Bixby practiced law and was the Chief Staff Attorney of the Court of Appeals of Virginia. He has a juris doctorate from George Mason University School of Law and a master's degree in public administration from the John Kennedy School of Government at Harvard University.

The Concord Coalition was founded in 1992 by the late former Sen. Paul Tsongas D-Mass., former Sen. Warren Rudman, R-N.H., and former U.S. Secretary of Commerce Peter Peterson. Former Sen. Bob Kerrey, D-Neb., was named a co-chair in 2002. The organization is dedicated to educating the public about the causes and consequences of federal budget deficits; the long-term challenges facing America's entitlement programs; and how to build a sound economy for future generations.

The Fiscal Solutions Tour is cosponsored by the Concord Coalition, the departments of Political Science, Economics, and Accounting and Finance; Finance Club; College Republicans; ISU Democrats; National Affairs; and the Committee on Lectures, which is funded by the Government of the Student Body. More information on ISU lectures is available at http://www.lectures.iastate.edu, or by calling 515-294-9935. 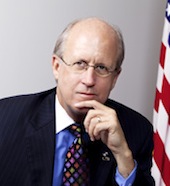