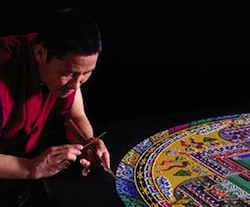 AMES, Iowa - The head lama of the Drepung Loseling Monastery in Tibet will present "The Mystical Arts of Tibet: Symbolism of the Sand Mandala" at Iowa State University, at 8:15 p.m. Wednesday, Sept. 21, in the Memorial Union Sun Room. The talk is in conjunction with the creation of a mandala sand painting in the Memorial Union Main Lounge by Buddhist monks from the monastery. The evening lecture is free and open to the public.

The lama, a Tibetan spiritual leader or teacher, will discuss the mandala -- a geometric design representing the universe -- as a sacred cosmogram and explain how it is used as an object of contemplation. A mandala depicts the pure nature of the world and how we can live most effectively.

Formed of a traditional, prescribed iconography that includes geometric shapes and ancient spiritual symbols, the sand-painted mandala is used as a tool for re-consecrating the earth and its inhabitants. When Buddhist monks create a sand mandala, they believe it brings the creative energy of that sacred dimension into our lives and attunes us to this natural perfection.

The creation of the mandala at the Memorial Union includes an opening ceremony with chants, music and mantra recitation, and ends with the dismantling of the five-foot-square painting and dispersal of the millions of grains of sand. The monks will work on the mandala daily Monday, Sept. 19 through Thursday, Sept. 22 (see sidebar for schedule).

The Drepung Loseling Monastery was originally established in 1416 in Lhasa, Tibet. The Chinese Communist takeover of Tibet in 1959 resulted in the destruction of all but a dozen of Tibet's 6,500 monasteries, including Drepung, and in the killing or imprisonment of the monks. However, about 250 monks from Drepung Loseling survived and, as refugees in India, built a monastery in exile southeast of Mumbai.

The monks of the Drepung Loseling Monastery travel the United States yearly on The Mystical Arts of Tibet tours to educate others about their culture and traditions, as well as to raise funds to support the monastery in India. His Holiness the Dali Lama endorses the tour "as a means of promoting world peace and healing through sacred performing art."

The talk is cosponsored by Student Union Board and the Committee on Lectures, which is funded by the Government of the Student Body. More information on ISU lectures is available at http://www.lectures.iastate.edu, or by calling 515-294-9935.

"The Mystical Arts of Tibet: Symbolism of the Sand Mandala"

Buddhist monks from the monastery will create a mandala sand painting in the Memorial Union Main Lounge, across from the post office, Sept. 19-22.