AMES, Iowa - For decades, scientists have believed that a relationship exists between how much biomass plant species produce and how many species can coexist.

When plotted on a graph, the resulting line forms a hump shape, with maximum species richness occurring at the point of intermediate productivity.

Now it's time to get over the hump, according to new research in the current issue of the journal Science.

Stanley Harpole, assistant professor in the Department of Ecology, Evolution, and Organismal Biology at Iowa State University, was part of the team researching productivity and richness, and he says the research doesn't support that relationship.

"This hump pattern that everyone thought was true . . . it just isn't there," said Harpole. "This hump was the hypothesis for a long time, but it just isn't supportable."

Harpole says that the amount of biomass is one of the more important components of an ecosystem, so there will be worldwide interest in this research.

"Ecologists have long been interested in this relationship between how many plants there are and how much they produce," said Harpole. "For years they [scientists] have been plotting correlations looking at the relationship of biomass to species richness." 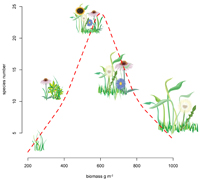 The established hump shape thought to exist for decades isn't supportable, according to Harpole.

There was no 'hump' shape, according to Harpole. In fact, after plotting the data from all the sites, only one of the 65 sites showed a hump-shaped pattern.

"And that is supposed to be the 'true' pattern?" said Harpole.

Harpole believes the original work that led to the predictions for a hump shape was good research, and it showed a correlation between richness and productivity. But it didn't show cause-and-effect relationships.

"Hundreds of papers have talked about this and it has become fixed in researchers' heads that this is a true pattern," said Harpole.

The lead author of the paper is Peter Adler from Utah State University who is part of a Nutrient Network (NutNet) team that he, Harpole and others established.

The study is the first major paper produced by NutNet, a worldwide, ecological research group of more than 70 scientists on five continents that works cooperatively on studies of this kind.

"This is exciting science to me," he said. "We are just trying to figure out what is going on. How the world works. That is what we really wanted to know."

It is no longer hump day, according to new research in the current issue of the journal Science. Research that included Stanley Harpole of Iowa State University challenges a widely-accepted idea from the 1970s showing as plant biomass produced in a system increased, so did the number of plant species, to a point. After that point, the number of plant species is thought to decline. When plotted on a graph, the result is a hump shape, with maximum species richness occurring at the point of intermediate productivity. But, now it's time to get over the hump. 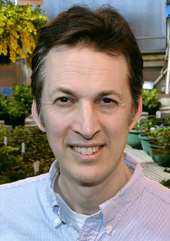 Stanley Harpole, assistant professor in the Department of Ecology, Evolution, and Organismal Biology