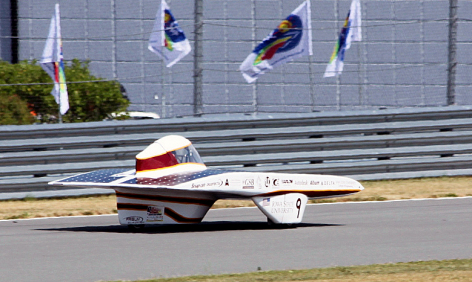 AMES, Iowa – Hyperion, Iowa State’s solar race car, cruised most of Tuesday and qualified for the cross-country American Solar Challenge with some laps to spare.

Team PrISUm – the Iowa State students who design and build cars that run on sunshine and little electric motors – raced 125 laps around the 1.6-mile track at the Monticello Motor Club in New York. The performance met the one-day qualifying standard of 105 laps.

The performance also put Team PrISUm in second place after day one of the three-day Formula Sun Grand Prix. The track race sets the starting grid for the 1,650-mile, July 14-21 American Solar Challenge from Rochester, N.Y., to St. Paul, Minn.

“This is honestly one of the best days of solar car racing I’ve been part of,” said Evan Stumpges, the team’s project director and a May graduate in mechanical engineering. “There were no electrical or mechanical failures, just some tire changes and they were a lot quicker than last year’s race in Indianapolis.”

The only trouble on the day was a 30-minute delay in the morning to double-check the car’s solar array. That allowed the University of Michigan to race to a 20-lap lead.

“If we had started at the same time, we would be directly competitive with them,” Stumpges said. “That promises good things with this car.”

The team’s next goal is to try to make a run at Michigan and pole position.

“We’re definitely proud of the car,” Stumpges said. “It has come a long way and we’ll see where it takes us.”

Team PrISUm is off to a great start in the Formula Sun Grand Prix. The team needed only one day to qualify its solar race car for the July 14-21 American Solar Challenge. The team will race the next two days to try and take the lead -- and pole position -- from the University of Michigan.

“We’re definitely proud of the car. It has come a long way and we’ll see where it takes us.”

Evan Stumpges, the team’s project director and a May graduate in mechanical engineering