Hyperion’s first day on the road is a quick one; Iowa State minutes off the lead 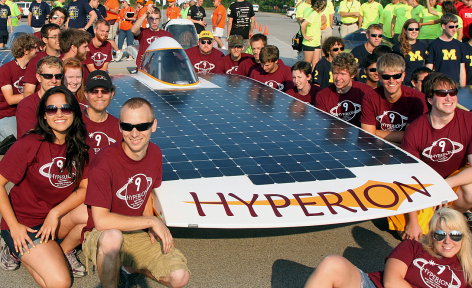 AMES, Iowa – Team PrISUm’s biggest challenge during the first day of the 1,650-mile American Solar Challenge was working up a winning strategy.

Unlike past races, the team doesn’t have to improvise fixes to its solar race car by the side of a country road.

No, this time it’s all about keeping a solid solar race car at the front of the pack.

“The car has been working so well, there are different problems this year,” said Evan Stumpges, the team’s project director and a May graduate in mechanical engineering.

Now the team has to answer some tough questions: How fast to run? How far to run down the battery pack? How to respond to changing weather? How to win this cross-country race for student-designed and student-built solar race cars?

“We’re working on a strategy to keep the car competitive with the top teams,” Stumpges said. “We’re continually adapting the strategy as we learn the car better.”

The students of Team PrISUm have tuned and improved the telemetry system that constantly records and sends information about Hyperion’s performance. So Stumpges said the team is getting more and more useful data for its strategy sessions.

So far, Stumpges said the developing strategy seems to be working: “I think this is the best we could have possibly hoped for.”

Team PrISUm had a great day on the road during the first day of the American Solar Challenge, a 1,650-mile race for solar race cars. The team is 15 minutes behind the leading team. And now it's developing a strategy to catch and pass that team.

During day one of the American Solar Challenge (from Rochester, N.Y., to Erie, Penn.) Hyperion:

“We’re working on a strategy to keep the car competitive with the top teams. We’re continually adapting the strategy as we learn the car better.”

Evan Stumpges, the team’s project director and a May graduate in mechanical engineering.