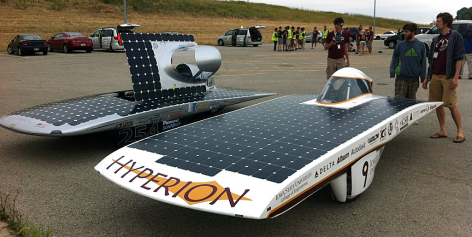 AMES, Iowa – Team PrISUm was feeling good at the start of Friday’s racing: “The sun is back today!” the team tweeted.

Sunny and hot conditions have been very good to Hyperion, Iowa State’s solar race car. In steamy conditions that have overheated the battery packs of other cars, Hyperion has used its heat-tolerant batteries to drive up to a solid second place.

And so, as the sun rose toward midday on Friday, the team ran Hyperion at 50-plus mph. But when the team lost real-time battery and performance data because of a glitch in the chase van, the team opted for a more conservative drive into the stage stop in La Crosse, Wis.

It was the seventh day of the American Solar Challenge, an eight-day, 1,650-mile race for student-designed and student-built cars powered by nothing but the sun and little electric motors. Hyperion had a solid hold on second place, no need to risk running the battery pack dry.

That made Hyperion the fourth car to drive into La Crosse. But the overall standings remain the same: Michigan leads, Iowa State is second and Principia College is third.

“We weren’t quite as fast as usual,” said Evan Stumpges, the team’s project director and a May graduate in mechanical engineering.

But, if there are good and sunny charging sessions before the Saturday morning start, Stumpges said the team can get back on the throttle.

“Hopefully, we can start the day with a full battery pack tomorrow morning and we can sprint into the finish,” he said.

It’s a quick 150-mile trip to the finish line at the Minnesota State Capitol in Saint Paul. And if Saturday goes as well as most of the past week, Team PrISUm will be packing some trophies for the return trip to campus.