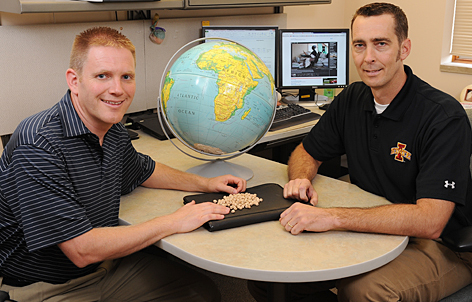 AMES, Iowa -- The United Nations humanitarian office reports that there's been a more than 20 percent increase in the number of people needing international aid since the start of the year, fueled mainly by hunger in sub-Saharan Africa. But thanks to Iowa State University researchers, there may be more small-scale commercial seed companies to assist in crop production to better feed those starving nations.

The ISU College of Business professors detailed their tool and its use in a paper titled, "Supply Chains in Sub-Saharan Africa: A Decision Support System for Small-Scale Seed Entrepreneurs," which will be published in a future issue of the Decision Sciences Journal.

In the paper, ISU researchers report that it is necessary to infuse a consistent supply of improved seed varieties into local sub-Saharan African crop production in order to improve low crop yields. The best distribution channel for the improved seed varieties may be small-scale commercial seed companies, but local entrepreneurs struggled to determine whether such businesses are viable.

"It's a tool to enable people who live in these areas to make decisions on starting seed companies," Martens said.

Bobby Martens (first row, third from right) conducted a weeklong training session in Ghana on the use of the tool to potential seed entrepreneurs. Photo provided by Martens

"As we developed the tool, we varied levels of population density, which translates to greater transportation distances for the same level of demand," Scheibe said. "We also varied spoilage, pilferage, and other causes of seed loss."

Martens visited the region four years ago to conduct a weeklong training session in Ghana for people from six sub-Saharan nations on the use of the tool to potential seed entrepreneurs. He says Ghana's minister of agriculture visited the training session.

"It was a collaborative work that originated through the Seed Sciences Center in a relationship they had with the International Crops Research Institute for the Semi-Arid Tropics," Martens said.

The DSS applies decision science research in a humanitarian application and offers important managerial implications about supply chain infrastructure for anyone interested in starting one of these companies.

In many cases, it found surprising results when it came to potential seed entrepreneurs who already owned their own storage facilities.

"Often, these seed entrepreneurs may already have a large shed or older building," Scheibe added. "One interesting discovery was that it actually was more profitable to pay rental on storage rather than to use an existing owned storage building. This appears counterintuitive.  You'd say, 'I own this building, why pay to use someone else’s instead?'  The rental facilities had better security and better containment capabilities resulting in reduced spoilage, theft and rodent infestation, and this would yield greater profitability over using owned, less secure storage. "

Martens and Scheibe hope to extend their work by creating additional decision tools for seed entrepreneurs in South America and other parts of the world.