This season’s influenza strain among pigs and humans appears mild 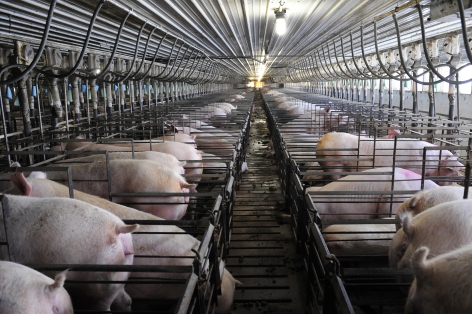 There have been more than 220 cases of humans contracting H3N2 influenza after contact with swine this year, but ISU experts say the flu strain appears to be mild. Larger Photo. Photo by Robert Elbert.

AMES, Iowa – Increasing reports this month of humans infected by influenza after close contact with pigs at county and state fairs shouldn’t send pork producers – or anyone else, for that matter – scrambling for the panic button, veterinary and animal science experts at Iowa State University said this week.

James McKean, a University Professor of veterinary diagnostic and production animal medicine and associate director of the Iowa Pork Industry Center, said pork producers have been dealing with flu strains infecting their herds on an annual basis for almost a century.  He said an H1N1 strain of influenza struck swine herds during the pandemic of 1918, and producers have dealt with flu strains nearly every year since then, usually in the fall.

The H3N2 variant that has prompted officials at county and state fairs this summer to ratchet up precautionary measures likely won’t become a cause for major concern for consumers or producers, McKean said.

“Influenza A is a very unstable virus that changes each year through resortment and substitution,” he said. “Some changes are able to cause disease and others are less active.  The H3N2 variant this year appears to be mild.”

He said the greatest danger for the swine industry stems from a potential drop in demand for pork like the one that accompanied the H1N1 scare from 2009.  That year, major international consumers such as China and Russia temporarily stopped importing some American pork because of unfounded concerns that H1N1 could be spread through eating the meat.  McKean was quick to point out that humans will not contract influenza from eating pork.

“The influenza will not get in the meat – not a chance,” McKean said. “The virus isolates in the lungs and respiratory system and doesn’t spread to the rest of the animal.”

Cases of humans contracting the H3N2 variant after contact with pigs this year reached 225 as of Friday, according to the Centers for Disease Control and Prevention.  That’s up from just 12 for all of last year.  Many of the cases involve children who had been showing pigs at fairs in recent weeks, leading officials at the Iowa State Fair to closely monitor pigs for symptoms.

“If we find a pig that shows symptoms of flu, we will isolate the pig and keep it away from people and other hogs in the Swine Barn,” Leuschen said. “We walk the Swine Barn regularly and watch for clinical signs of any diseases.”

Two pigs at this year’s fair were tested after showing signs of influenza, but both cases turned out to be negative after submitting nasal swabs to the Iowa State Veterinary Diagnostic Laboratory.

There were no confirmed cases of H3N2 among pigs at this year's Iowa State Fair, which concluded this weekend, Leuschen said.

McKean said common symptoms in pigs are similar to those of infected humans:  fever, malaise, nasal discharge and cough.  But producers who notice such symptoms among their herds don’t have a wide array of options available to them beyond watching the pigs closely and treating individual animals for secondary bacterial infections that may arise as a result of the influenza, he said.

“We encourage producers to do the same common-sense things we encourage everyone to do,” McKean said. “Get flu shots for your family and workers and keep anyone with flu-like symptoms out of pig barns.”

Increasing reports this month of humans infected by influenza after close contact with pigs at county and state fairs shouldn’t send pork producers – or anyone else, for that matter – scrambling for the panic button, veterinary and animal science experts at Iowa State University said this week.  The H3N2 variant that has prompted officials at county and state fairs this summer to ratchet up precautionary measures likely won’t become a cause for major concern for consumers or producers.

Where do vaccines fit in?

Hank Harris, an ISU professor in animal science and veterinary diagnostic and production animal medicine and the founder and president of Ames-based Harrisvaccines, agreed with the assessment that this year’s variant of H3N2 will not likely reach the levels of severity of 2009’s H1N1 strain. But he said holding the current strain in check now could lower the risk that it will change its genetic structure to possibly become a greater threat in the future, a process referred to as reassortment.

“If you can suppress a strain enough with vaccines, you can lower the risk of a reassortment that could cause widespread problems later,” Harris said.

Harris has a long history developing breakthroughs in the production of animal vaccines for a range of diseases, including influenza.

Harris began developing ribonucleic acid (RNA) particle technology in 2004.  The technique allows for the replacement of structural genes within the RNA of a virus known as PRRSV with structural genes from a different virus.  The process sidesteps the necessity of culturing a live virus, slashing the amount of time it takes to develop vaccines.  Developing a vaccine through traditional means can take six months to year, while the RNA particle technology can produce a vaccine in four weeks, Harris said.

Harrisvaccines, which is headquartered in the ISU Research Park, is ready to develop a vaccine to protect swine from the H3N2 influenza variant should it become necessary, Harris said.