AMES, Iowa – Candy Crowley, CNN’s chief political correspondent, will deliver a lecture at Iowa State University on Tuesday, Nov. 13, one week after Americans go to the polls for the 2012 election.

Crowley will analyze the results of the election and provide insight from her storied career covering national politics as the fall 2012 Mary Louise Smith Chair in Women and Politics. The event, to be held in the Sun Room of the Memorial Union at 7:30 p.m., is free and open to the public.

Currently, Crowley is the anchor of “State of the Union with Candy Crowley,” a weekly hour-long program of newsmaker interviews and analysis of important issues. In her role as CNN’s chief political correspondent, Crowley covers a broad range of stories, including presidential, congressional and gubernatorial races and major legislative developments on Capitol Hill. Her assignments have taken her to all 50 states and around the world.

Crowley has worked as a White House correspondent for the Associated Press, a correspondent for NBC News, and a congressional correspondent for CNN. She earned a prestigious Gracie Allen Award in 2009 for coverage of Hillary Clinton’s bid for the White House. Other recent honors include the 2005 Edward R. Murrow Award and the Joan Shorenstein Barone Award for excellence in journalism for her reporting on the 2004 presidential election.

The presentation is part of the 20th anniversary celebration of the ISU Carrie Chapman Catt Center for Women and Politics, the primary sponsor of the lecture series.

“As part of the Catt Center’s 20th anniversary celebration, we wanted to bring in a nationally known, respected woman journalist to analyze the Nov. 6 election results, including the role of women as voters and political candidates,” said Catt Center Director Dianne Bystrom.

On Oct. 16, Crowley moderated a town-hall style debate between Barack Obama and Mitt Romney, choosing which audience members would get to ask questions and enforcing the rules of the debate. She was the first woman in 20 years to moderate a presidential debate.  ABC’s Carole Simpson, who also visited Iowa State as a Mary Louise Smith chair, was the first woman to moderate a presidential debate in 1992.

The Mary Louise Smith Chair in Women and Politics was established in 1995 to honor the Iowa native who chaired the Republican National Committee from 1974 to 1977, the only woman to have held that post. The chair established in her name brings a public leader, scholar or activist to the Iowa State campus once or twice each year. Crowley is the 23rd prominent woman leader to visit Iowa State as part of the program.

The lecture is cosponsored by the University Committee on Lectures, which is funded by the Government of the Student Body. 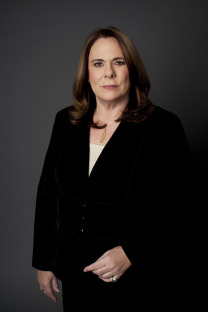