AMES, Iowa -- When the director of Iowa Prison Industries (IPI) wanted to update the design of some furniture and wood products manufactured by offenders, he came to Iowa State University. After all, ISU purchases IPI furniture for residence halls and other buildings. And there's a supply of salvaged wood through the university's TreeCycle Program. 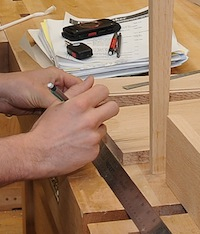 Enter Associate Professor Chris Martin. He teaches the advanced furniture design studio in the College of Design's integrated studio arts program. Martin transformed the potential partnership into a comprehensive project that turns downed campus trees into funding for promising artists. He invited the Iowa State Alumni Association (ISUAA) to consider partnering with the college on this project by marketing items the students design.

"The Alumni Association is excited to be a part of this project," said Jeff Johnson, ISUAA president and CEO. "These are student-designed pieces made into alumni keepsakes from campus wood by rehabilitated individuals."

Along the way, studio arts students have learned new skills, the State Penitentiary's offenders have new products to create and soon alumni can purchase new heirloom-quality Iowa State items made of wood from trees that once grew on campus.

From trees to furniture

"We have a great deal of wood from downed campus trees - hundreds of board feet of wood - that has to be used for university purposes," Martin said. "So when Prison Industries asked about the wood, it spawned this whole idea for an ongoing project."

Most of the wood for this initial project comes from ash trees, removed from campus - in anticipation of the catastrophic emerald ash borer that is sweeping the upper Midwest - and replaced by other shade trees. When damaged trees are removed from campus, the university's Facilities Planning and Management has the tree trunks processed into lumber and returned for furniture projects. The remaining parts of the trees are chipped into mulch for planting beds.

And, according to Johnson, the Alumni Association is passionate about sustainability and re-using campus resources and artifacts.

From Ames to Fort Madison

A part of the Iowa Department of Corrections, IPI teaches skills to offenders through work programs. Each prison in Iowa has an industry. They produce items for their own use - cleaning products, bedding and inmate apparel, among others. And they manufacture products purchased by other state agencies, schools, churches and nonprofit organizations. These range from embroidered clothing to highway signs to the new furniture in ISU President Leath's office.

ISU is partnering with the woodworking operation at the State Penitentiary in Fort Madison, Iowa's maximum-security prison. In February, the 12 students in Martin's class visited the facility.

"Traditionally, our studio projects are one-of-a-kind works of self expression. For this project, students had to learn about designing for a production line, which they'd never seen before. I wanted them to understand that you can't use hand-cut dovetails in a drawer, for example," Martin said.

"And they needed to learn how to maintain high quality while making concessions to get it produced to be economically feasible," he added.

Martin also thought it was important for the students to see the people who would produce their designs.

"This partnership brings together two very different populations for the benefit of both. The inmates involved gain a level of dignity and self-worth and it is a great form of rehabilitation and job training. And students have a chance to consider preconceived notions about prisoners," Martin said.

While at Fort Madison, the students toured the three floors of the woodworking shop, where 70 inmates manufacture cabinetry for Habitat for Humanity houses and college dormitory furniture. The students also lunched in the cafeteria, eating the same food as the inmates. A SWAT team surrounded the group throughout their visit.

From students to client

"I told the students it's an interesting project because the only thing restricting them is their ability to design. There are no parameters," Martin said. "At the same time, working with a client forces them to consider that they're making it for someone else. That's a lot tougher to do than to design for yourself." 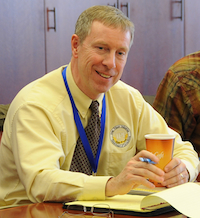 In March, Martin's students presented their designs for critique to Dan Clark, IPI director, and Bob Fairfax, IPI sales and marketing manager, and an ISUAA panel -Johnson; Scott Dahl, director of membership and marketing: and Carole Gieseke, chief communications officer. The ISUAA representatives on the panel were looking for pieces that could be passed down, carrying the Iowa State story from generation to generation. IPI staff were considering how much wood might be needed and how producible the items would be.

Students designed a coatrack, a trunk, a mirror, lamps, headboards, picture/diploma frames, chairs and even a gun case. Their pieces featured the campanile, ISU swans Lancelot and Elaine, the campus skyline and Iowa State logos. 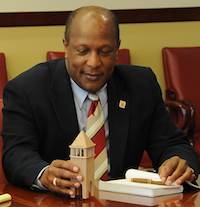 From campus to alumni

IPI will pay a small fee to the students for their designs and materials used in their prototypes, which will be finished by May 4. IPI has received permission to use university trademarks on the products. In addition, IPI has hired one of Martin's former students as an intern for the summer to work on updating some of their upholstered furniture used in public spaces.

Production will begin in August and the ISUAA will include the students' items in its fall catalog. The pieces will be numbered limited editions, and will be available exclusively through the ISUAA (www.isualm.org/store). A portion of the proceeds goes towards supporting scholarships.

"So when Prison Industries asked about the wood, it spawned this whole idea for an ongoing project." 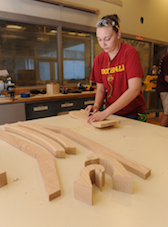 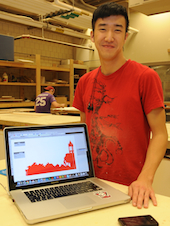 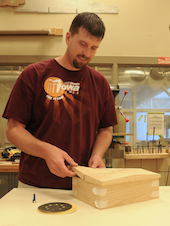 "These are student-designed pieces made into alumni keepsakes from campus wood by rehabilitated individuals."