AMES, Iowa -- None other than Plato himself said, "You can discover more about a person in an hour of play than in a year of conversation."

It's a theory that Mitchell Squire, Iowa State University associate professor of architecture, has been testing nearly his entire professional life, from research to exhibits, and since 2009, in the semester-long option TOYS! Studio.

Now, Squire's innovative teaching and his students' discoveries will be on view from April 27 through November 16 at Reiman Gardens, presented in conjunction with the LEGO Nature Connects exhibit and as part of Reiman's 2012 theme, "Some Assembly Required."

The Toys! Studio has used the work and practices of the Charles and Ray Eames studio as a model for some of its exercises. Charles was known to have said, "Toys are not really as innocent as they look. Toys and games are preludes to serious ideas."

Since January, this semester's 12 TOYS! Studio students - one interior design senior, the others a mix of architecture and landscape architecture graduates-to-be - have been engaged in both the thoughtful and the practical, with the goal of creating an exhibit in the Conservatory building. Squire took them through traditional studio-based exercises such as remodeling existing toys.

"I want us to think of toys and think of play in the same serious ways we think about other things, which carry their seriousness on their sleeves," Squire said.

The studio itself carried an air of seriousness this semester. Unlike previous years, students had a real client and a real installation. That meant that they took in hand all the steps that any other architect with a project would take on, from client presentations to building logistics, as well as managing the experience by public visitors.

"Having a real client has been a good experience - how to have a relationship, flesh out ideas, and bring more to the design language at the same time," said Lyndley Kent, East Troy, Wis., a fifth-year architecture student. "And we've had a very strict deadline, so you have to get things done differently than with a normal review-and it has to last seven months."

For its final design, the students designed to embrace several basic toy forms - pinwheel, wheels and vortexes to name just a few - and develop an oversized, interconnected machinery with water and balls (two more classic playthings) that is both underfoot and overhead, part performance art and part large-scale architecture.

"I asked them to think in terms of a machine that was somehow inspired by the work we had done, something they thought could be animated, something that was more cohesive in theme," Squire said.

Plans are one thing; execution is another thing entirely. After the initial design, students then built progressively larger and larger sections of the installation, figuring out materials and fabrication as well as cost along the way.

"There was evolution from concept to reality, and then they had to figure out how and when and how long it would take to build it," Squire said. "The reason I wanted them to make as accurate a mockup as they could was so that they could begin to understand the technical challenge to what the actual thing would be."

Since spring break, the students have been hammering, sawing, and testing in a vacant Ford dealership in downtown Ames. They've had to figure out that oversize plastic is really expensive, that steel is a challenge to cut, that foot traffic has to be protected from getting drenched by the water element.

"It's a lot different to actually design something and see it built; you don't get to do that very often," says interior design student Kara Thompson, Gunnison, Colo. "But overcoming challenges and working with my hands has been really rewarding."

They've gotten out of the classroom and worked with fabricators, too, rethinking things as they've moved organically and experientially. They've learned that plastic is too malleable once it's over a certain size, that the metal fabricator would let them bend steel on the weekend to cut costs and that there are machine suppliers who know enough about bolts and fasteners to fill a book.

"Even thinking through how to do the installation - getting it there and set in two and a half days-has been good," Squire said.

And once the water is turned on, the pinwheels spin, the ball floats down the ramp, there will be wonder and delight - not just on the faces of kids, but adults, too.

"There's this intersection between what a child might enjoy and a parent might find wonderful, too," Squire said. "We have all been acclimated to how to act in architecture and the landscape, and this will challenge that as a toy that has grown large, that invites you to engage, that asks you to stand in wonderment."

Students in Mitchell Squire's TOYS! Studio created an exhibit in conjunction with the Reiman Gardens' LEGO Nature Connects exhibit. The students' exhibit embraces basic toy forms like a pinwheel and cannon to create a world of wonder and delight. It will be on view in the Reiman Conservatory from April 27 through November 16. 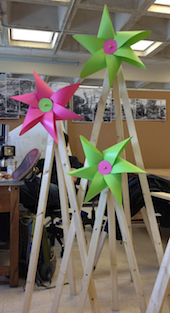 Students built progressively larger and larger sections of the installation, figuring out materials, fabrication and cost along the way.

"There was evolution from concept to reality, and then they had to figure out how and when and how long it would take to build it."