AMES, Iowa - The most recent annual results from a four-year Iowa State University study on using cover crops between rows of corn reveals that higher yields - by as much as 10 percent - are possible using the soil-saving approach to farming.

The results are the best yet in the ongoing research, according to Ken Moore, Charles F. Curtiss Distinguished Professor of Agriculture and Life Sciences and primary investigator on the project, who plans to carry on the trials for at least one more growing season.

There were factors in last year's weather that made the higher yields possible, according to Moore.

"This is really promising," said Moore of the results. "Last summer was hot, and the cover crop systems performed better because living mulch held the water in the soil better. It was the first year those ground covers went completely dormant. They weren't transpiring any water at all and they were serving as a barrier to moisture moving out of the soil, and that's good."

The study began with the 2008 growing season through support from a Sun Grant designed to look at the effect on the soil of removing corn stalks, cobs and leaves - called stover - to use as biomass for producing cellulosic-based ethanol.

After the 2010 planting season, funding for the project was exhausted, but Moore was able to carry on the tests on a limited basis, focusing only on those systems that showed the most promise.

Moore is working with Kendall Lamkey, chair of the Department of Agronomy and Pioneer Distinguished Chair in Maize Breeding, and Jeremy Singer, collaborator and assistant professor at the National Laboratory for Agriculture and the Environment on the study.

Removing the stover to make biofuel, it is feared, will reduce carbon in the soil and also speed erosion.

Moore and his group of researchers tested several different agronomic systems and cover crops to find which ones produce the best results. 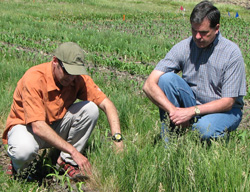 When the results were tallied, Moore found the control plots averaged 220 bushels per acre, the bluegrass plots netted 230 bu./ac. and the fescue plots yielded 240 bu./ac.

In 2010 and 2009, the bluegrass and fescue plots averaged about the same yield as the control plot. The rainy spring of 2008 caused yields for the control to be much better, as the no-till plots were planted late in the year.

"This experiment wasn't designed to develop management practices for the farm, it was designed to test the feasibility of using these perennial ground covers for producing corn," said Moore.

"We would conclude these systems are feasible, but we recognize that it could be a somewhat brittle system. We've only tried it in one location, with one corn hybrid for four years. We don't know how it is going to perform in the entire state with different soils and different growing conditions."

Moore stresses that one goal of the study is to get corn breeders involved in a cover crop system so hybrids can be developed to work in concert with cover crops. The cover crops themselves can also be improved for better results.

Moore says that this cropping system might be appealing for farmers in the long term.

"Farmers make tough economic choices every year when they plant and harvest their crops," said Moore. "If changes need to be made to ensure future generations have the same great farm land and life that we do, we need to offer farmers choices that are not just to our benefit, but to their benefit as well.

"Growing corn with a perennial cover crop promises to address many of the environmental concerns being expressed about corn production and will enable farmers to harvest stover for bioenergy as that market develops. It appears to be a win-win opportunity. These cover crop systems may eventually offer the farmer a profitable alternative that can ensure long term success, at least that's my hope."

The most recent annual results from a four-year Iowa State University study by Ken Moore, Distinguished Professor of agronomy and primary investigator on the project, reveal that using cover crops can lead to higher yields - by as much as 10 percent . The results are the best yet in the ongoing research. Moore plans to continue on the trials for at least one more growing season.

Farmers make tough economic choices every year when they plant and harvest their crops. If changes need to be made to ensure future generations have the same great farm land and life that we do, we need to offer farmers choices that are not just to our benefit, but to their benefit as well.