AMES, Iowa - In the two and a half years since Adam Bogdanove, professor at Iowa State University in the Department of Plant Pathology and Microbiology, along with Matthew Moscou, a former graduate student in that department, discovered how a class of proteins from plant pathogenic bacteria find and bind specific sequences in plant genomes, researchers worldwide have moved fast to use this discovery.

Last year it was first shown that the proteins can be fused to DNA modifying enzymes to manipulate genes and gene functions by Bogdanove and colleagues at the University of Minnesota, led by former ISU professor Dan Voytas, and another group led by Iowa State University faculty member Bing Yang, professor in the Department of Genetics, Development and Cell Biology.

The fused proteins are called TAL effector nucleases, or TALENs, and can be used to better understand gene function in model plant and animal systems, to improve traits in livestock and plants, and even to treat human genetic disorders, according to Bogdanove.

The fact that these proteins can be readily engineered to bind DNA sequences of choice has resulted in a flurry of publications that demonstrate their utility in many different types of cells, including human stem cells.

Largely because of the advent of TALENs, the journal Nature Methods last month named gene editing with engineered nucleases as 2011 Method of the Year. 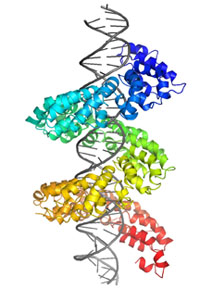 TALENs, represented by the colorful strands, bind to the double helix of a DNA.

Now, Bogdanove and researchers from the Fred Hutchinson Cancer Research Center in Seattle have taken the next step by determining the 3-D structure of a TAL effector bound to DNA.

The findings were posted this week on Science Express, a website for early release of papers of exceptional interest that are due to be published in an upcoming issue of the journal Science.

The first author of the study is Amanda Mak, a postdoctoral researcher in the Hutchinson center. Andres Cernadas, a post doctoral resarcher in Bogdanove's lab also contributed.

By visualizing the shape of TAL effectors and how they physically interact with the DNA double helix, scientists can now better understand the biochemistry that underlies their ability to recognize and stick to specific DNA sequences.

This will in turn improve scientists' ability to target the proteins to different locations in a genome and to better predict and prevent their binding to unintended, off-target sites, according to Bogdanove.

The structure itself is also interesting from a basic biology standpoint. "It is really quite beautiful," he says, "So far there is nothing else in nature quite like it."

To determine the structure, Bogdanove collaborated with Fred Hutchinson scientists Barry Stoddard, an expert in protein DNA interactions, and Phil Bradley, a computational biologist. Led by Stoddard, the group completed the project in just over a year by using a unique combination of traditional X-ray crystallography and novel computer-based modeling method. 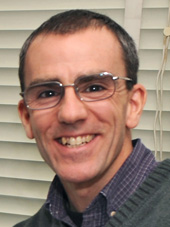 It is really quite beautiful. So far there is nothing else in nature quite like it.