AMES, Iowa -- Jonathan Wickert, dean of the College of Engineering at Iowa State University, has been tapped to become ISU's next senior vice president and provost.


President Steven Leath selected Wickert to become Iowa State's chief academic officer following a national search. The appointment is subject to approval by the Iowa Board of Regents.

Wickert will assume his new post July 30, and an interim will be appointed to lead the College of Engineering while a search is conducted for a new dean.

"Jonathan Wickert has shown strong leadership and an innovative approach to issues facing the College of Engineering and the university as a whole," Leath said. "He's the right person to lead a talented group of deans and other senior university officials in further advancing the quality of our academic programs."

"I'm looking forward to working closely with President Leath and helping to implement his vision to advance Iowa State to the next level," Wickert said.

"In the coming weeks and months, you'll see me working closely with Provost [Elizabeth] Hoffman on the transition and reaching out across campus to listen and learn more about all our academic, research and extension programs."

Wickert earned bachelor's (1985) and master's (1987) degrees and a doctorate (1989), all in mechanical engineering, at the University of California, Berkeley.

Wickert will succeed Hoffman, who announced in February that she intended to leave the provost position by year's end. 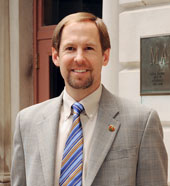 "I'm looking forward to working closely with President Leath and helping to implement his vision to advance Iowa State to the next level."