"Bully" documentary film will be shown Jan. 28 at Iowa State

AMES, Iowa -- This year, more than 13 million American kids will be bullied. And 3 million will be absent from school because they feel unsafe there. Bullying has become the most common form of violence experienced by young people in the nation.

Iowa State will host a showing of the documentary film "Bully" at 7 p.m. Monday, Jan. 28, in the Memorial Union Great Hall. A discussion will follow the 94-minute film. The presentation is free and open to the public.

Directed by Sundance- and Emmy-award winning filmmaker Lee Hirsch, the film looks at how bullying has affected the lives of five kids and their families, including 12-year-old Alex of Sioux City. "Bully" documents how teachers and school administrators respond to aggressive behaviors that defy “kids will be kids” clichés. It captures a growing movement among parents and young people to change how bullying is handled in schools, communities and society as a whole. The film offers an intimate glimpse and insight into the often-cruel world of the lives of bullied children.

The presentation of "Bully" is sponsored by the Student Union Board Awareness Committee and the Committee on Lectures, which is funded by the Government of the Student Body. 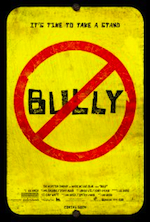