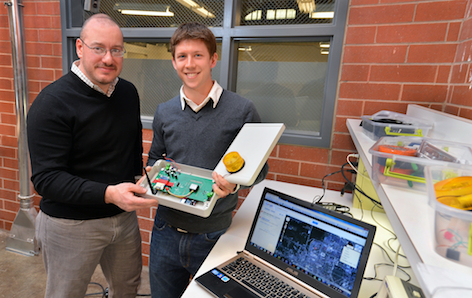 AMES, Iowa -- David Ringholz was searching for a project idea for the graduate students in an industrial design studio class he teaches at Iowa State University when he heard a startling story on the radio: Tractor fatalities had reached epidemic rates. That was in the fall of 2011.

Less than two years later, Ringholz is ready to unveil the prototype of a device that addresses one aspect of tractor rollover fatalities: response time. It’s an amazingly simple product design that could save hundreds of lives in Iowa alone. 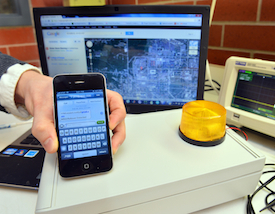 "E.T." monitors tractor's position, sending a signal in the event of a rollover. The signal alerts family or EMS cell phones and links to rollover location on map. Photo by Bob Elbert.

Ringholz’s team has developed an instrument similar in concept to the signals used by trapped avalanche victims. Their tractor-mounted communications device alerts family and emergency personnel of a rollover when it happens.

"I couldn't believe this product didn't already exist. Now it does and that's ridiculously exciting," said Ringholz, an associate professor and chair of industrial design at Iowa State.

From current events to design studio

The radio story that sparked the project was a public health bulletin from a University of Iowa College of Public Health study of tractor accidents. Ringholz tracked down Kelley Donham, professor of occupational and environmental health and chair in rural safety and health. Donham was intrigued. He told Ringholz, "We love the idea of getting people from design involved, but we're not 100 percent sure how you're going to deal with this problem."

Ringholz and his students "unpacked the problem," completing an extensive literature review of research on tractor accidents and safety systems, and conducting interviews with key ag safety researchers.

"We were absolutely startled at how many fatalities there were and continue to be. There’s been one death per month since we started this project, and I think all but two were in Iowa," Ringholz said.

Ringholz invited Jamie Horwitz, an associate professor of industrial design, to join the project. At the time, Horwitz was teaching a seminar, "The Diffusion of Innovations," to the same students. With her expertise in the psychology of design, Horwitz could help the students look at the issue through an additional lens.

"After reviewing the hundreds of journal articles and reports that describe a problem and fail to solve it, we were really motivated to use our own approaches to design thinking," Horwitz said.

"My disciplinary framework helped to guide us toward new ways of thinking about the context of these accidents," she said.

"As far as I know, we are the first industrial designers to look at this problem," Ringholz said. "All previous research we encountered was from public health, ag safety and policy perspectives. Designers are looking at other ag safety issues — like air quality — but none have looked at tractor rollover safety."

Although tractors built after 1985 are well equipped with rollover safety devices, the older ones are not. And, as the class discovered, the oldest tractors are used for the most rollover-prone activities — routine chores. 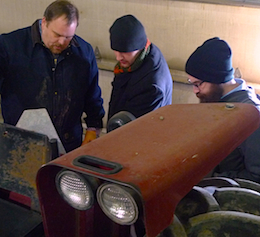 They concluded that tractor safety is as much a behavioral issue as it is a design issue. For example, they considered why farmers perceive risk so differently from others, and what makes them do things that others find dangerous.

They also discovered that rollover protection systems added to older tractor models are 99 percent effective when used properly. But the systems aren't used.

"There are lots of analogous safety products — like seat belts, life jackets and helmets — where a technology exists, but people choose not to use it," he said. "So that gap is an opportunity to investigate why safety devices aren't used. We found it's actually a very complex story."

At the end of the semester, the class had selected two strategies to carry forward. One would examine how to increase the likelihood that people would buy, properly install and correctly use rollover protection systems.

The second strategy would investigate how to reduce the amount of time between occurrence and discovery of a rollover accident. Tractor operators regularly work in remote areas for long periods of time. The class surmised that many deaths could be prevented if first responders were notified of the accident much sooner. And that opened possibilities for "some very concrete design opportunities" to explore.

About this time, Ringholz secured funding through the university's office of the senior vice president and provost's strategic initiative program, which included support from the vice president for extension and outreach. The project received $315,000 for two years as part of the College of Design’s proposal for outreach projects that extend from the classroom to impact Iowans’ lives.

Ringholz joined forces with the Electrical and Computer Engineering Department. Mani Mina, a senior lecturer, and John Pritchard, a Ph.D. candidate, helped develop the prototype in a “pretty short period of time."

They’re calling the prototype "E.T." for extraterrestrial. The device monitors tractor position and sends out a signal in the event of a rollover. Using cellular technology, data is sent to a relay station that locates the tractor on a map and notifies EMS and family members. If satellite technology is also used, the alert can be sent to "anyone, anywhere."

While the "E.T." prototype accomplishes one strategy proposed by Ringholz’s class, the other — getting people to use the safety device — required an "advanced design thinking" technique known as a service design. A service design model includes every element and touch point in a system that addresses a problem too complex for a single solution.

The class came up with the idea of a community-based service similar to a volunteer fire department. They envisioned a kind of Rollover Protection Squad to provide information, training and outreach on tractor rollover devices for specific pre-1985 tractor models. All they lacked was access to the community of tractor operators.

The University of Iowa's Donham connected Ringholz's team to just the right people: The Rural Health and Safety Clinic of Greater Johnson County. They address issues like tractor safety through outreach and training intended to improve the adoption of farm safety technology. 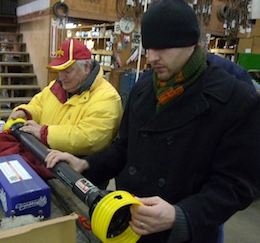 Andy Winborn, a business and risk management specialist, is the clinic's program manager. Cattle producer Roger Stutsman is a board member and a benefactor for the private organization. Both are Iowa State alumni. Having lost his son in a tractor rollover accident in 2008, Stutsman is on a mission to address rollovers and other ag safety issues. They met with Ringholz and his colleagues to discuss a potential partnership.

"They told us, 'We have the people and the problems, but need designers and engineers to help make the products.' And I told them, 'We have the reverse: ideas and products in need of people'" Ringholz said.

The next step is field-testing and fine-tuning "E.T."

"We are looking forward to working with Andy’s team to field test these units with farmers. We hope to learn more about the conditions and improve performance," Ringholz said.

"If we can put this in front of the right people, the obstacles will disappear. Our long-term goal is to set up this Rollover Protection Squad model and replicate it elsewhere. We can apply it to other ag safety issues like power takeoffs and grain bins," Ringholz said.

"Farming is still the most dangerous job, and many opportunities exist for applied industrial design," he said. "Our primary goal is fatality prevention. We'd give these away if people would use them. But if there is a viable community business model for this, we have the responsibility to do that."

"Farming is still the most dangerous job, and many opportunities exist for applied industrial design. Our primary goal is fatality prevention. We'd give these away if people would use them. But if there is a viable community business model for this, we have the responsibility to do that."

A research and outreach collaboration led by Iowa State’s Department of Industrial Design has designed an amazingly simple product that could save hundreds of farmers lives in Iowa alone. They have developed a prototype of a device that addresses one aspect of tractor rollover fatalities: response time. The tractor-mounted communications device alerts family and emergency personnel of a rollover when it happens.

Some of the students' findings

Farming is the most dangerous profession in the United States. (1)

Tractor rollover is the leading cause of agriculture-related fatalities. (2)

One in 10 tractor operators experiences a rollover in their lifetime. (3)

Eighty percent of all tractor rollovers happen to experienced farmers.(1)

Rollovers happen faster than the human capacity to respond to them. (4)

Seven out of 10 farms will go out of business within a year of a tractor-rollover fatality.(1)