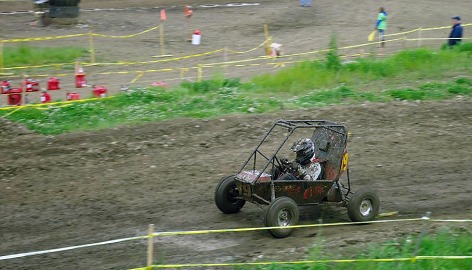 6-13-13 update: A change of 1.3 inches made all the difference for Iowa State’s Baja SAE Team. To fix problems with the rear axle connections on its off-road racer, the team’s student-engineers tried lowering the transmission by a little more than an inch. And when the students showed up for their second – and final – competition of the summer in Rochester, N.Y., they finally had the reliability they’ve been working to build into their car. The result was a strong, top-ten performance over a muddy, soggy race course. “We only had one hiccup,” said Scott Brehm, the team’s technical director. “We hit a water puddle and our Briggs & Stratton engine sucked in water and stalled.” Team members quickly built a splash guard for the engine and went back to racing. Their car ran to a 13th-place finish in the crucial, four-hour endurance race. That – combined with strong marks in suspension and traction and in design – produced an overall finish of 10th among 88 ranked cars. “After that first competition, we were all slightly disappointed,” Brehm said. “But it was good knowing we had another chance to get everything worked out.”

5-22-13 update: On and off track, Iowa State’s Baja SAE Team was scoring very well heading to the final event of the May 16-19 competition in Bellingham, Wash. And when that four-hour endurance race started, the team was passing cars. But then rear suspension problems stopped everything. When the wheels were down and drooped, the axle connections failed, said Scott Brehm, the team’s technical director. The team was able to make some repairs, but the race for big points was lost. Iowa State dropped to 37th of 72 teams. Brehm thinks the problem can be fixed by adjusting suspension geometry before next month’s competition in New York. “We’re very impressed with the car in all other aspects,” he said. “This is kind of a letdown, but it’s more fuel for the next competition.”

“The big thing we tried to address this year was reliability,” said Scott Brehm, a graduating senior from Rickardsville who’s a mechanical engineering major and the technical director of Iowa State’s Baja SAE team.

There’s good reason for the team’s focus on reliability. Last year, the team finished 17th in its first competition and 69th in its second.

“In the second competition, there were a lot of failures,” Brehm said.

And so team members are making a lot of changes.

Levi Benning, a junior from Plainfield who’s studying agricultural systems technology, designed and machined an aluminum transmission case to accept new gears manufactured from stronger steel. His handiwork features smooth lines rather than sharp angles. And that eliminates some of the stress points on the parts.

“I’ve spent numerous hours doing this,” Schaeffer said. “This has been a big learning curve for me, but it has been a lot of fun.”

Even with all those changes to their Baja racer, the students know a few parts are going to fail – there are just too many bumps and jumps in off-road racing. So team members have been manufacturing spares.

“A couple of the pieces failed last year,” Daly said. “We had to fix them on fly, so we’re trying to make spare parts this year.”

All that attention to building a more reliable racer, plus some practice runs outside their campus garage, has team members looking forward to competition. 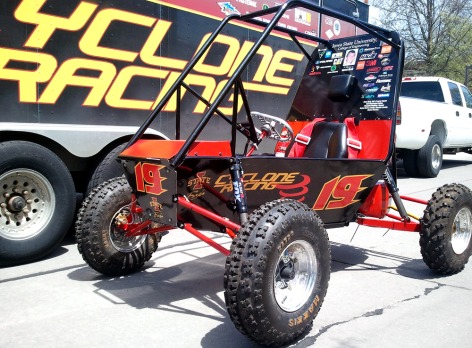 Iowa State's Baja SAE Team is ready to race the No. 19 car this week in Washington and next month in New York. Larger photo. Photo by Cyclone Racing.

Take a bumpy, muddy practice lap with the Baja team.

The student-engineers of Iowa State's Baja SAE Team have been busy designing and building what they hope is a reliable off-road racer. Their first real test is later this week at an international competition in Bellingham, Wash. Team members are hoping the car can survive the contest's big event, a four-hour endurance race.

“I’ve spent numerous hours doing this. This has been a big learning curve for me, but it has been a lot of fun.”