Companies spin off from Center for Biorenewable Chemicals, ‘de-risk’ their technologies 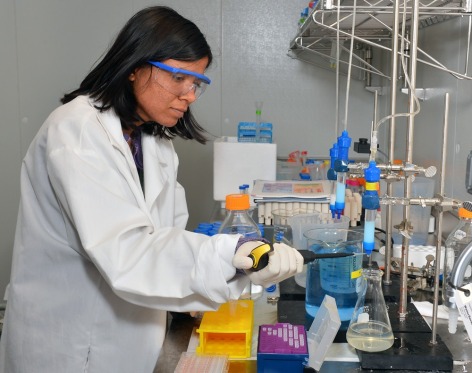 Shivani Garg, an Iowa State graduate student and founder of OmegaChea Biorenewables, works to develop a new manufacturing platform that uses microorganisms and unique enzymes to produce biorenewable chemicals that can be used to make detergents, lubricants and polymers. Larger photo. Photo by Bob Elbert.

AMES, Iowa – Two companies launched by discoveries at an engineering research center based at Iowa State University have won business development grants to help them commercialize their biorenewable technologies.

Both technologies would help industries produce chemicals from biorenewable sources rather than petroleum. They were developed by researchers at the National Science Foundation (NSF) Engineering Research Center for Biorenewable Chemicals based at Iowa State. The center (known as CBiRC, “See-burk”) was established in 2008 by the NSF’s Engineering Research Center program. So far, the NSF has committed to support the center with $30.5 million over an eight-year period.

“We’re working to develop absolutely cutting-edge technologies that can then be transferred to the commercial realm,” Shanks said. “But these technologies haven’t been sufficiently ‘de-risked’ for commercialization.”

Among the risks to be studied: What happens when the technologies are pushed beyond the laboratory scale? Can they be cost-effective? Can they produce enough biorenewable chemicals to interest companies, including the center’s 30 industry members?

Center leaders came up with a research and development model they hope will answer those questions.

“Why don’t we establish startups that can develop these technologies?” said Basil Nikolau, the center’s deputy director and Iowa State’s Frances M. Craig Professor in the Roy J. Carver Department of Biochemistry, Biophysics, and Molecular Biology. “NSF has funding streams to take fundamental research and advance it further.”

And so two of the center’s spin-off companies wrote and won technology transfer grants supported by the NSF:

● OmegaChea Biorenewables LLC of Ames won a one-year, $225,000 Small Business Technology Transfer Phase 1 grant. The grant will help the company develop a new manufacturing platform that will use microorganisms modified to use unique enzymes for the production of biorenewable chemicals. The chemicals can be used to produce detergents, lubricants and polymers.

“This grant from NSF really helps the company to get on its feet,” said Ludmila Rizshsky, an Iowa State assistant scientist in biochemistry, biophysics and molecular biology and the leader of the grant. “We have the idea, but we need to develop the real product.”

Rizshsky said she likes how the CBiRC is working to move research projects beyond the lab.

“The research here is really going into the market and being useful to people,” she said. “I think that’s exciting.”

● Glucan Biorenewables LLC of St. Louis won a six-month, $150,000 Small Business Innovation Research Phase I grant. The grant will allow the company to prove that its bio-based reaction system works with actual biomass to produce chemicals that can be used to make packaging, insulation and other products. So far, the technology has only been tested using pure sugars.

“We wouldn’t do a lot of this work at the university,” said David Martin Alonso, an honorary fellow at the University of Wisconsin-Madison and the leader of the company’s grant. “This is the research you need to do to prove this technology can be commercialized.

“We’re not only understanding the fundamental knowledge of this, but we’re combining that knowledge with commercialization.”

Shanks, CBiRC’s director, said four companies have so far spun out of the center’s research programs. They’re all developing new ways to produce biorenewable chemicals. And they’re all in very early stages of development.

“This is exciting because these are the first two startup companies initiated from the center that have won early stage technology transfer money,” Shanks said. “We have two more companies queued up. We hope to develop a pipeline of companies working toward technology transfer.” - See more at: http://www.news.iastate.edu/news/2013/07/19/cbircspinoffs#sthash.i88FeKA4.dpuf

Brent Shanks, director of the Center for Biorenewable Chemicals and Iowa State’s Mike and Jean Steffenson Professor of Chemical and Biological Engineering