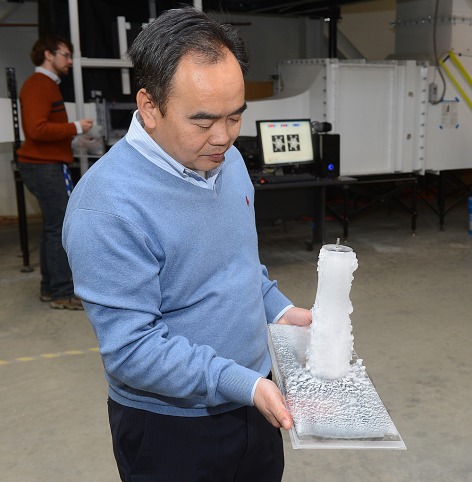 Iowa State's Hui Hu examines ice on a test model taken from the university's Icing Research Tunnel. The refurbished tunnel, which has been fully functional for a few weeks, is in the background. Larger photo. Photo by Bob Elbert.

AMES, Iowa – From somewhere back behind the Iowa State University Icing Research Tunnel, Rye Waldman called out to see if Hui Hu was ready for a spray of cold water.

The wind tunnel was down to 10 degrees Fahrenheit. A cylindrical model was in place inside the 10-inch-by-10-inch test section. The wind was blowing through the machine at 60 mph. So yes, said Hu, an Iowa State professor of aerospace engineering, turn on the water.

Waldman, a post-doctoral research associate, hit the controls and three spray nozzles threw a fine mist up into the wind. The tiny water droplets circulated through the tunnel, hit the model and started freezing. Within minutes, the frozen droplets distorted the model’s smooth and regular shape.

That ice is the result of a three-year project to fully refurbish a 20-year-old icing wind tunnel donated to Iowa State by the Goodrich Corp. (now UTC Aerospace Systems). The wind tunnel can operate at minus 20 degrees Fahrenheit with wind speeds as high as 220 mph. It can create everything from frozen fog to wet glaze ice. It has been fully functional for a few weeks.

“We’re trying to understand how the ice builds up on aircraft wings and wind turbine blades,” Hu said. “We want to understand the underlying physics. And when we understand the physics, we can develop better models to simulate and predict when and how ice will build up on cold days.”

Ice can build up “to quite ugly things” that are dangerous and costly, Hu said.

Ice changes the geometry and balance of wings and blades. That can rob aircraft wings of lift and cause crashes. It can reduce the efficiency of wind turbine blades tremendously, cutting the power harvest from winter’s strong winds. It can also throw off the balance of a wind turbine’s spinning blades, putting tremendous forces on shafts and machinery, leading to failures or shut-downs. Thawing ice on turbine blades can also be thrown hundreds of yards, potentially hitting people, buildings or vehicles.

With a better understanding of the icing problems, Hu said engineers could develop better solutions.

Hu said there are only a few icing wind tunnels in the country, and the ISU Icing Research Tunnel is the only one on a university campus. 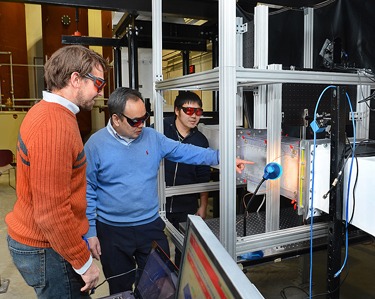 “In the past, there haven’t been many quantitative experiments to let people see the underlying physics of wing and turbine blade icing,” Hu said. “This is what’s really needed.”

Hu’s experiments, for example, show everything from the thickness of ice as it flows over a wing, the heat transfer of individual water droplets as they freeze, the irregular speed of freezing droplets on a wing or blade and the finger-like patterns of ice formation.

Though they share similar airfoil shapes, Hu said icing on aircraft wings and wind turbine blades can be quite different.

That’s because wings are typically made of metal, have very smooth surfaces and are good heat conductors. Turbine blades are typically a composite such as fiberglass, have rougher surfaces and don’t conduct heat very well. Wings also operate under drier conditions when they’re at altitude; turbine blades near the surface are in the middle of winter sleet and snow.

“All of that makes a huge difference,” Hu said.

So far, most of the data about airfoil icing is related to aircraft.

“But the anti-icing strategies that work for aircraft might not be best for a wind turbine,” he said.

Now that Iowa State’s icing wind tunnel is up and running and looking brand new, Hu said Iowa State engineers will be gathering more and more data about all kinds of icing issues.

Iowa State engineers have refurbished an icing wind tunnel and are using it to study ice buildup on aircraft wings and wind turbine blades. Ice on the wings and blades can be dangerous and costly. A better understanding of the icing problems could lead to better solutions.

“We’re trying to understand how the ice builds up on aircraft wings and wind turbine blades. We want to understand the underlying physics. And when we understand the physics, we can develop better models to simulate and predict when and how ice will build up on cold days.”

Here are some of the advanced flow measurements taken by Hui Hu's research team. (See the airfoil images at the top of the page.)