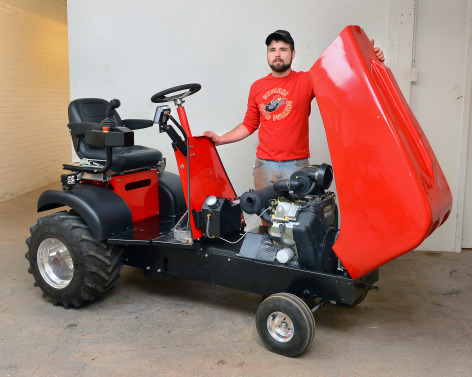 Alex Haight, a member of the Cyclone Power Pullers team, displays the ¼-scale tractor the team will enter in a national competition this month. Photo by Bob Elbert. Larger image.

6-4-2014 update:  The Cyclone Power Pullers finished fourth overall during the 2014 competition. The team took home honors for the top oral presentation and awards for serviceability and being the most improved team over last year.

Team leader Jason Herbrers said he was pleased with the results, and the tractor performed without any of the unexpected malfunctions that struck in previous years.

“We were very prepared and built a solid tractor,” Herbers said. “Nothing broke at all during competition so there was no fixing involved, which was most likely the first year for that in a long time.  It was very rewarding watching all the hard work pay off and take some time being a major competitor in all the events.”

AMES, Iowa – If the genuine article performs like the prototype, the 2014 Cyclone Power Pullers are in business.

The Cyclone Power Pullers, a team of Iowa State University students who have designed and built a ¼-scale tractor from scratch over the course of the last academic year, know what to expect when they enter their machine in a national competition later this month.

Still stinging from a disappointing finish in last year’s competition, the team decided that speeding up the process to allow for the construction of a full prototype this spring would give them an edge, said Jason Herbers, a senior in agricultural engineering and team leader of the Cyclone Power Pullers.

Herbers, a native of the Dyserville area, said the team had the prototype built and running in April, and the test pulls the team conducted provided some encouraging results.

“The testing is really important for us,” Herbers said on a recent afternoon in the team’s workshop on campus. “Last year, we didn’t have the tractor running until we left for the competition. This year, we know our design works and what we can expect from it.”

The competition, organized by the American Society of Agricultural and Biological Engineers, starts on May 29 in Peoria, Illinois. The entrants are judged on a range of criteria including performance, safety, ergonomics, manufacturability and maneuverability. In addition to showing off how the tractor performs, the team will also be judged on a written submission and oral presentation.

The Power Pullers finished 22nd out of 29 teams last year, but the learning experience afforded by building the prototype has given the team some confidence that things will go better this time around. Six team members from last year have returned, offering the team a wealth of experience knowing what worked and what didn’t with last year’s tractor.

Among the new additions to the 2014 machine is a cast aluminum transaxle with full-floating axles. The axle design means the shaft only transmits power without having to support the weight of the machine.  The two sand-cast transaxle housings were completely designed, developed and created by the team at facilities on campus.  The change from the previous year's tractor reduces production costs and improves the safety and serviceability of the tractor, Herbers said.

Another improvement over previous tractors is the inclusion of steel hydraulic lines, he said. The use of hoses in the past required the hydraulic lines to be covered in a sheathing material. This year’s steel lines result in a lighter tractor with less clutter and a more organized look and feel, Herbers said.

“My favorite part is developing my ideas with a computer drafting program and then receiving the physical parts that play a key role on the tractor,” he said. “It's very rewarding seeing the tractor come together.”

He said the troubleshooting, management and communications skills he’s developed as a member of the Power Pullers go beyond what students can learn in a classroom, giving him an edge in the job market. In fact, Herbers said he’s about to begin a summer internship with John Deere in Dubuque, just down the road from his hometown.

“A lot of students don’t get this kind of opportunity just working in the classroom,” he said.

The Cyclone Power Pullers, a team of Iowa State University students who have designed and built a ¼-scale tractor from scratch, are ready to enter their machine in a national competition later this month.

“The testing is really important for us. Last year, we didn’t have the tractor running until we left for the competition. This year, we know our design works and what we can expect from it.”