Prior to leading SIU’s admissions office, Suski worked in several other enrollment management roles there: admissions coordinator, campus visit coordinator, associate director of recruitment and interim director of undergraduate admissions. She earned a bachelor’s degree in radio and television (1998) and a Master of Public Administration degree (2004), both from SIU.

Suski begins her new position at Iowa State on July 8.

“We are very pleased that Katharine has agreed to join us as Iowa State’s next director of admissions,” Harmon said. “I look forward to working with her in this key role at the university. I’m confident her admissions experience at a major public institution, along with her strong leadership skills and creativity, will further strengthen our very talented admissions team.”

Suski will report to Harmon and provide data-driven strategic planning and direction in the Office of Admissions, including recruitment, selection, processing, orientation and enrollment of new undergraduate students and the processing of graduate applicants.

“I thank Darin for his leadership and guidance during a period of record growth. He has contributed greatly to our strategic enrollment initiatives and the adventure students begin when they choose Iowa State,” Harmon said. 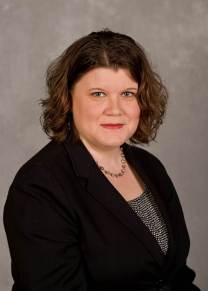