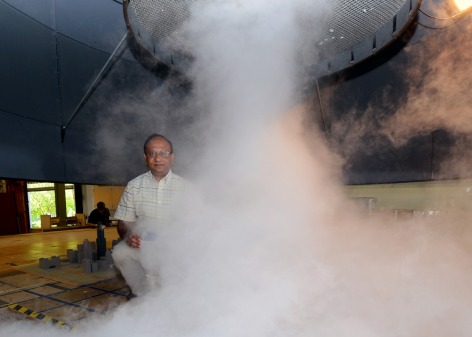 Partha Sarkar designed and built the Iowa State University Tornado Simulator a decade ago. A recent grant will support new simulator studies of tornado winds and their impacts on homes and buildings. Larger image. Photo by Bob Elbert.

AMES, Iowa – The Iowa State University Tornado Simulator kicked up a thick and slowly spinning funnel cloud over a model of a small town, overwhelming the miniature streets, buildings and homes.

Partha Sarkar turned from the laboratory vortex and announced, “That’s an EF3.”

Most tornadoes (about 90 percent of them) are EF3 or less in intensity. And so Sarkar advocates that homes and buildings within tornado alley across the middle of the U.S. be designed to withstand EF3 tornadoes and their top wind speeds of 165 mph.

Sarkar, an Iowa State professor of aerospace engineering, knows something about the biggest tornadoes. He walked the debris fields of Parkersburg in 2008 and Joplin, Missouri, in 2010, and has seen what the 200-plus mph winds of EF5 storms can do to cities, buildings and people.

To study the interaction of tornadoes with man-made structures, he designed and built a tornado simulator that can create and move a tornado-like vortex back and forth over a test bed. He, his coworkers and Iowa State students have worked with the simulator for a decade, studying the loads and pressures caused by laboratory storms passing over models of homes and buildings.

How, for example, do nearby structures and terrain affect those winds? How do building codes, building ages, structure shapes, roof types and even construction quality influence tornado damage? How do internal pressures inside buildings influence tornado damage? And, how are the wind loads distributed and shared by a building’s components, such as roof sheathing, roof trusses, walls, studs and nails?

As part of this new project, “We will try to quantify the uncertainties in estimating tornado winds and the corresponding structural damage,” Sarkar said.

To do that, Sarkar said his research group will use the latest advances in tornado simulation, data acquisition and computer modeling to answer engineering questions about tornado winds and their effects on buildings.

One result of this research could be refinements to the Enhanced Fujita (EF) Scale that considers storm damage to measure the strength of tornadoes. Another result could be new provisions in building codes and construction practices for tornado-resistant buildings.

“The overarching goal of this research is to enhance society’s resiliency to tornadoes through innovative design and construction of building components and systems in tornado-prone regions,” the Iowa State and Texas Tech researchers wrote in a project summary.

At Iowa State, Sarkar said the grant will support experiments and data collection with the tornado simulator. One experiment, for example, will study actual buildings damaged in tornadoes by creating computer and physical models of the buildings and their structural failures. The computer models will be refined and verified by running lab tornadoes over the physical models. The computational models – called finite element models – will help researchers understand and predict the damage caused by tornado winds.

Data from the experiments and models will also be shared with the Texas Tech construction engineers who will study building performance in tornado winds.

“In the long run,” the researchers wrote in their summary, “the research is expected to contribute to methods and strategies that can be implemented for preventing tornado hazards from becoming disasters.”

Iowa State University's Partha Sarkar will use a $250,000 grant from the National Science Foundation to continue his studies of tornado winds. The grant will support experiments in the Iowa State Tornado Simulator that will help engineers answer questions about how tornadoes interact with homes and buildings. How, for example, do building codes, structure shapes, roof types and even construction quality influence tornado damage?

Watch a College of Engineering video that gives you all access to the Iowa State Tornado Simulator.

“We will try to quantify the uncertainties in estimating tornado winds and the corresponding structural damage.”

“In the long run, the research is expected to contribute to methods and strategies that can be implemented for preventing tornado hazards from becoming disasters.”