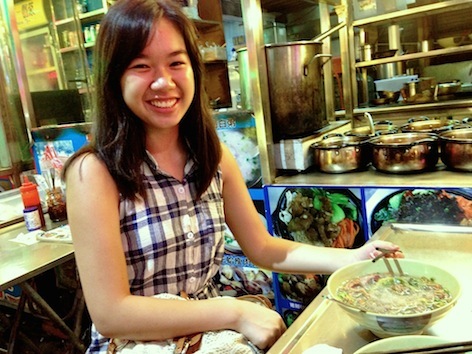 AMES, Iowa -- It's been Laurelin Haas' lifelong dream to live and study in China. After all, she was born there. Her three sisters were born there. Her family hosted an exchange student from there. And she has studied the Chinese language for the past five years.

At 11 months old, Haas was adopted by a single mother in Muscatine. And after years of studying hard and saving money, she is back in her homeland for a year of intensive cultural and language study. Thanks to a 2014 David L. Boren Scholarship, the Iowa State University junior is experiencing the adventure of a lifetime.

"It's always been China for me. I want to do something related to China in my career," said Haas, who majors in community and regional planning and environmental studies.

Boren Scholarships provide funding for undergraduates to study less commonly taught languages in world regions underrepresented in study abroad programs and critical to U.S. interests. They are sponsored by the National Security Education Program, a major federal initiative designed to build a broader and more qualified pool of U.S. citizens with foreign language and international skills. In exchange for funding, Boren Scholars commit to working in the federal government for at least one year after graduation.

Chosen from a pool of 868 applicants, Haas is one of 165 Boren Scholars from 36 states studying in 29 countries. Thirty are studying in China. 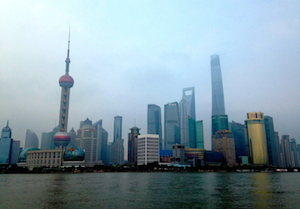 Haas is enrolled at the Shanghai University of Finance and Economics as a student in the 21st Century City program through the Alliance for Global Education. She chose the program because it is "a perfect fit for both of my majors." Not only will she have the opportunity to strengthen her language skills, she will be able to study urbanization and the environmental issues associated with China's rapid development.

"By the year 2030, over 1 billion people will live in Chinese cities. The environment won't be able to maintain this breakneck speed of urbanization, unless cities are deliberately planned for sustainability," she said.

"The economy is reshaping China's urban landscape, and I think the country has reached a tipping point," Haas said. "There's so much potential here in sustainable development and I want to help."

Shanghai will serve as a case study example of the environmental transformation accompanying China's rapid urbanization. Haas is taking courses on the Chinese society in the 21st century, urban planning, and energy, water and green technology.

The 21st Century City program includes a weeklong journey into China's rural areas. And that dovetails into the ISU Honors capstone project she'll work on next year with Carlton Basmajian, associate professor of community and regional planning. While in China, she plans to do research for the project, which will focus on the rural migration into Shanghai. 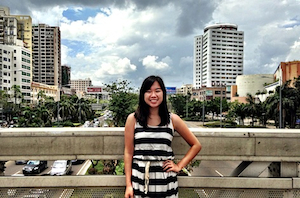 Haas also is enrolled in an intensive Chinese language course that meets for nine hours each week, and she got a jumpstart on her Chinese language immersion over the summer. She lived and worked with her family's former exchange student who runs an English school in Haikou. The city is the capital of Hainan Province, an island in the South China Sea. Haas taught English to middle school students and a class of 6-year-olds several hours a week.

Despite her years of studying Chinese, Haas said she is far from fluent. And her first weeks in Haikou — a city that sees few foreigners  — were "a struggle."

"My listening skills weren't there at all. People speak so quickly in real life that it's been hard for me to understand what is going on a lot of the time," Haas said.

And to make matters worse, people expect her to be fluent because she looks Chinese.

"Even if I tell people I am American, I grew up in America and I don't speak Chinese, they still continue to speak to me as if I could. They don't quite believe it," she said.

When she arrived in Haikou (considered a small city in China despite its population of 1 million), Haas said she knew "enough Chinese to survive getting around the city, but not enough to hold a conversation with a 5-year-old."

For two months, Haas explored the city on foot, on buses and on a motorcycle or two. She shopped, sang karaoke and attended Pilates and yoga classes with members of her temporary family and on her own. She conducted conversations in Chinese with new friends, attended individual tutoring sessions and practiced alone with homemade vocabulary flashcards. After all of that, Haas said she was starting to feel more confident in her language skills. 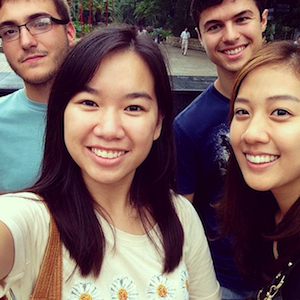 The last week of August, Haas moved on to college life in Shanghai. She shares a dormitory apartment with another American study abroad student and a Chinese roommate, and is feeling "pretty well adjusted already," compared to her transition from Iowa to Haikou in June. On her first day in Shanghai, before she had met anyone, Haas had "the confidence to eat out by myself and to chat with people in Chinese."

This is not Haas' first visit to China nor will it be her last. As a child, she accompanied her mother on trips to adopt her sisters. She traveled with them three years ago to visit their hometowns (hers is Nanning). That sealed the deal. She knew she had to return, and she found her way.

It's been Laurelin Haas' lifelong dream to live and study in China. After all, she was born there and was adopted when she was 11 months old by a single mother in Muscatine. Thanks to a 2014 David L. Boren Scholarship, the Iowa State junior is is back in her homeland for a year of intensive cultural and language study. She is enrolled at the Shanghai University of Finance and Economics as a student in the 21st Century City program through the Alliance for Global Education. Haas majors in community and regional planning and environmental studies.

"Even if I tell people I am American, I grew up in America and I don't speak Chinese, they still continue to speak to me as if I could. They don't quite believe it."