“In the Footsteps of Norman Borlaug: The Golden Years of Wheat Production” will be at 8 p.m. Monday, Oct. 13, in the Memorial Union Great Hall. A reception and student poster display will precede the lecture at 7 p.m. in the South Ballroom. Undergraduate and graduate students will present posters on their research on world food issues. The Norman Borlaug Lecture is part of the World Affairs Series at Iowa State. It is free and open to the public.

As the most widely grown cereal crop in the world, wheat is a primary source of calories and protein for 4.5 billion people in more than 100 countries. Rajaram’s plant breeding research built upon the successes of the Green Revolution and resulted in a remarkable increase in world wheat production. By crossing winter and spring wheat varieties — which were distinct gene pools that had been isolated from one another for hundreds of years — he created wheat varieties that are disease- and stress-resistant and adaptable to diverse geographical regions and climates. In 2007, Norman Borlaug called Rajaram “the greatest present-day wheat scientist in the world.” 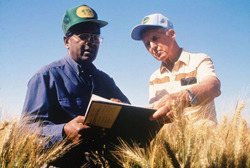 Rajaram and Borlaug at CIMMYT. Photo by Gene Hettel.

Rajaram worked side by side with Borlaug at the International Maize and Wheat Improvement Center (CIMMYT) before succeeding him as head of the wheat breeding program in 1972. He implemented a major expansion of Borlaug’s approach, advancing his mentor’s work during a period described as the ‘golden years’ of wheat breeding and production. Under Rajaram’s leadership, the center developed 480 wheat varieties released in 51 countries and widely adopted by small- and large-scale farmers alike.

Rajaram also launched an expansion of the global scientific wheat network — a worldwide exchange of genetic resources, information and innovations among researchers — which had not been done before. This led to the accelerated development and worldwide spread of high-yielding wheat varieties, keeping the expansion of global wheat production ahead of population growth and making wheat more accessible to the world’s poor.

Born in 1943 near a small farming village in northeastern India, Rajaram became the top-ranked student in his district, winning a scholarship to high school. After earning his bachelor’s degree in agriculture in 1962, he went on to complete his master’s in genetics and plant breeding at the Indian Agricultural Research Institute in New Delhi. In 1965, Rajaram entered the plant breeding doctoral program at the University of Sydney, Australia, where his professor and mentor was I.A. Watson, who had been a graduate student with Borlaug at the University of Minnesota.

In conjunction with the annual World Food Prize celebration, this lecture is coordinated by Iowa State University's Nutritional Sciences Council and co-sponsored by the Office of the President; Plant Sciences Institute; World Affairs Series; and the Committee on Lectures, which is funded by the Government of the Student Body. 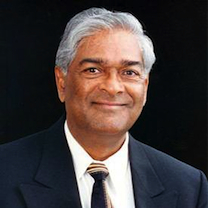 “In the Footsteps of Norman Borlaug: The Golden Years of Wheat Production”