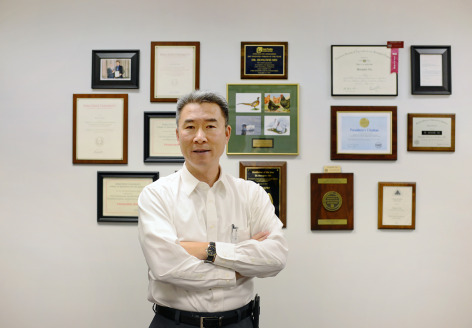 A childhood of hard work and scarcity on a rural Chinese farm inspired Hongwei Xin to devote his career to applying science and technology to agriculture. Photo by Amy Vinchattle. Larger image.

AMES, Iowa – His father told him years ago on a farm in rural China that science has no borders, and it was a lesson Hongwei Xin took to heart. Decades later and half a world away, Xin has dedicated his career to applying science to agriculture, making operations a little more efficient and life a little easier for farmers across the globe.

Xin, a Distinguished Professor of agricultural and biosystems engineering who holds the Iowa Egg Council Endowed Professorship, leads the Egg Industry Center at Iowa State University. The center conducts and coordinates research that sheds new light on some of the most important questions facing the egg industry and consumers.

Far from an Iowa-centric organization, the Egg Industry Center produces studies and statistics with a global vision that inform decisions by egg producers everywhere. It’s a vision that Xin traces back to that small plot of land in rural China where farming literally meant waking up before dawn and toiling in the fields with no modern mechanization – often on an empty stomach.

“My childhood made me determined to bring science and technology to farmers all over the world,” he said. “You have to learn how to use the machines and the new techniques and ideas that make modern agriculture possible.”

The toughest job on the farm

Xin grew up in a family with his parents and four brothers and sisters. They tended a small plot of land – a fraction of an acre – on which they grew corn, tomatoes and potatoes. They also raised a few geese, chickens, ducks and pigs.

Xin said he and his siblings would get out of bed before dawn to work in the field prior to heading off to school. After returning from their studies, they went back into the field until dark.

“There were plenty of days when I was hungry after school but had nothing to eat before I had to work in the field,” he said.

The food shortage was especially pronounced when it came to protein. Meat and eggs were a luxury reserved for festivals or birthdays, he said, a scarcity that further solidified his determination to modernize agricultural production worldwide.

“Improving egg production is an important means of ensuring there’s sufficient food to meet the nutritional needs of populations all over the world,” he said.

There was no shortage of tough jobs on the farm, but Xin said harvesting potatoes ranked among his least favorite. He and his sister pulled the plow themselves, and, although the potatoes would be ready for harvest, the corn harvest was still a few weeks away. That meant Xin had to maneuver around corn stocks that still reached over five feet tall to get the potatoes.

He would emerge from the field covered in nicks and cuts from the sharp edges of the corn stocks.

At 16, Xin left the farm for Shenyang Agricultural University. When the opportunity came his way to study in the United States, he jumped at the chance, due in large part to his father’s advice.

“My dad had a tremendous influence on me,” he said. “He made me believe that one day I could do something to make life easier for farmers. He told me that knowledge has no borders. Wherever you are, you can have an impact, and science and technology can serve everybody.”

He ended up with a master’s and Ph. D. in agricultural engineering from the University of Nebraska. While doing post-doctoral work at the University of Arkansas, he visited his friend’s family farm and was asked to help bale hay.

“My friend said it was the toughest job on the farm,” Xin said. “I had a feeling I could handle it.” 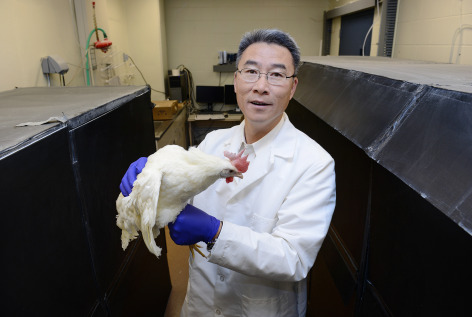 Xin's research on the egg industry is global in scope. Throughout much of the world, eggs are a cheaper and more plentiful alternative to other protein-rich foods like fresh meat, he said. Photo by Amy Vinchattle. Larger image.

Xin joined the faculty at Iowa State in 1993, enticed by the opportunity to contribute to a university known internationally for its strong agricultural tradition.

Iowa is the leading egg producer in the country, bigger than Ohio and Indiana – the next two states – combined. Xin said Iowa is home to 60 million laying hens, which produce around 14 billion eggs per year. That makes Iowa a fitting location for a resource like the Egg Industry Center, but Xin said the center strives to be of value beyond Iowa’s borders.

“Our track record has shown that this is a national center, and the information we provide is beneficial to everybody,” he said.

The Egg Industry Center conducts and coordinates research on topics like animal welfare, production efficiency, food safety and the environmental impacts of the industry. It also distributes a monthly newsletter that provides egg producers with key statistics on production, costs and flock sizes to guide their decisions.

Since 2009, the center also has hosted a yearly forum that allows industry leaders to meet with researchers and other experts to share ideas and ask questions.

Xin’s personal research has taken on a range of topics important to egg producers, including the environmental impacts of the industry as well as how to improve sustainability and productivity.

He’s currently working on a comprehensive analysis of three different egg production systems. The project compares traditional egg production, which usually requires several birds to be caged together, with alternatives such as an “enriched colony system” that allows for more spacious cages and amenities like perches and scratch pads. The study will also examine aviary-style production systems that don’t include cages at all and allow the hens to roam freely for much of the day.

Xin said his team has finished collecting data on each system in commercial settings and is working on analyzing the results, which may be published later this year.

“The best part of the job is using science and new knowledge to improve agriculture, whether that’s through better efficiency or food safety or building the trust of the consumer,” he said. “I love what I do, and I enjoy the position.”

For the director of the Egg Industry Center at Iowa State, science and agriculture have no borders. A childhood of hard work and scarcity on a rural Chinese farm inspired Hongwei Xin to devote his career to making life better for farmers the world over.

“My childhood made me determined to bring science and technology to farmers all over the world. You have to learn how to use the machines and the new techniques and ideas that make modern agriculture possible.”