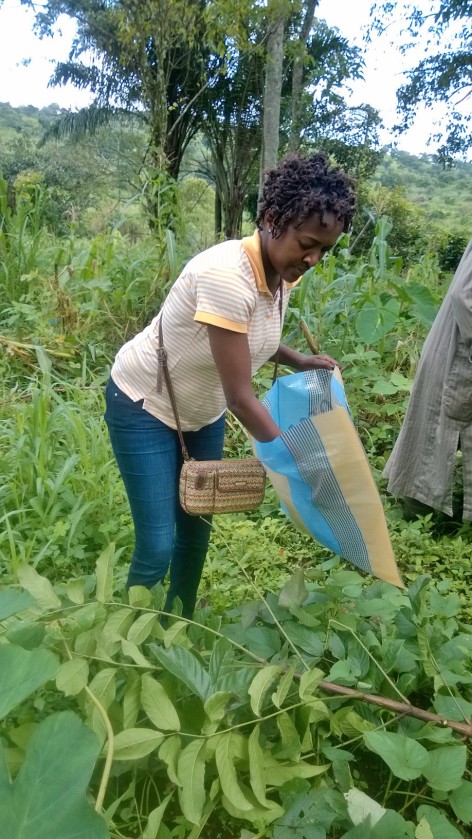 AMES, Iowa – An Iowa State University graduate student has unearthed some promising results in her quest to identify plant extracts to combat a devastating parasitic disease in Cameroon and other African countries.

Melanie Abongwa, a graduate assistant in biomedical sciences in the ISU College of Veterinary Medicine who grew up in Cameroon, hopes that her research could help to alleviate the suffering caused by onchocerciasis, a disease sometimes called river blindness caused by parasitic worms.

There’s no vaccine, nor is there an effective treatment to kill the adult worms that cause the disease. But Abongwa is studying a pair of plants native to Cameroon that rural residents have used to alleviate symptoms of the disease for years. Rural residents commonly turn to herbal remedies because of their limited access to modern medicine, but Abongwa said they have no scientific basis to claim how – or even if – the herbal treatments work.

“They don’t know what kind of dose they’re taking, what in the plants is making them better or if the plants may be toxic in other ways,” Abongwa said. “Those were questions that needed to be answered.”

She’s hoping that her research will fill in those gaps and potentially lead to new drugs to treat the disease.

Onchocerciasis can infect up to 90 percent of residents in some villages in rural Cameroon and other areas of sub-Saharan Africa, Abongwa said. The worms are transferred to humans through the bite of blackflies and migrate to the subcutaneous tissue underneath a host’s skin, where they mature and reproduce. The worms can cause a host to experience rashes and unbearable itching and even blindness.

“The burden that this disease imposes on the villages can’t be overstated,” Abongwa said. “The responsibility of taking care of the blind usually falls on the shoulders of children, often girls. That means they have fewer opportunities to go to school or build their own future.”

Abongwa spent a week in a rural village in Cameroon called Bambui, where onchocerciasis has reached endemic levels. She learned that people with the disease were boiling in water two different plants – Daniellia oliveri, a legume; and Psorospermum febrifugum, a flower – and drinking the liquid like a tea twice a day or applying it directly to the skin to treat their symptoms.

After having the plants identified by a botanist, she began breaking them down into basic extracts and then testing them at different doses to see if they had an effect on adult worms that had infected cattle and rodents.

Abongwa said of the 12 extracts she isolated, eight of them have shown promise as a means of combatting the worms. But, even if she can prove conclusively that the compounds can kill the worms, she also has to make sure the plants aren’t toxic to humans in other ways.

So plenty of work remains before any of the extracts could be used to develop new drugs, she said.

“She’s found some potent extracts,” Martin said. “The task now is to identify the chemicals that are bringing about the treatment.”

In 1987, the pharmaceutical company Merck committed to donating the drug Mectizan, known generically as ivermectin, to treat river blindness in Africa, Latin America and the Middle East. However, Abongwa said some in Cameroon avoid Mectizan treatment because it sometimes results in additional itching as a side effect of killing off one of the two worm species that cause illness.

Abongwa hopes that the plant extracts she’s studying will kill the worms that cause river blindness without causing those harmful side effects, she said.

Abongwa’s research is supported by the National Institutes of Health and the Schlumberger Foundation through its Faculty for the Future program, which awards fellowships to women from developing and emerging economies to pursue Ph. D. or post-doctoral research in science, technology, engineering and mathematics. Abongwa is also working with Fidelis Cho-Ngwa and Godfred Ayimele, who are faculty members at the University of Buea in Cameroon, where Abongwa completed her bachelor’s and master’s degrees in biochemistry.

An Iowa State University graduate student is on a quest to identify plant extracts to combat a devastating parasitic disease in Cameroon and other African countries. The answers may lie in a pair of plants Cameroon residents use to make herbal remedies to treat the disease.

“The burden that this disease imposes on the villages can’t be overstated. The responsibility of taking care of the blind usually falls on the shoulders of children, often girls. That means they have fewer opportunities to go to school or build their own future.”