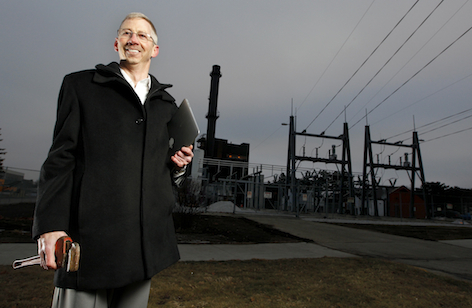 AMES, Iowa — On a beautiful, sunny day in early May 2004, Keith Allen was returning on his motorcycle from a visit to the grave of a cousin – the brother he never had. He would be back in Ogden by the time his three children were home from school. North of Jamaica, he passed a car with an elderly couple. As he approached a T-intersection, a carload of kids turned from his left and swung into his lane, playing chicken with him. Rather than head for a deep ditch with barbwire fencing, Allen went full throttle around the kids. By the time he got around them, he was on top of the T-intersection. He hit the brakes, laid his bike down and rode it out. When Allen hit the ground, he stopped. Or rather, the left side of his body stopped. His right side kept going.

The kids in the car kept going, too.

If it hadn’t been for the elderly couple driving by moments later, Allen’s story would have come to a screeching halt that day on that Guthrie County blacktop. The 41-year-old was cut in half lengthwise from his neck to his pelvis.

An air ambulance transported Allen to Iowa Methodist Medical Center in Des Moines. Four trauma team surgeons went to work. His neck was broken in three places, his left arm and hand were broken, his pelvis and left shoulder were split in half, and all ribs on his left side were broken. He lost his spleen and several inches of intestines.

The day after the accident, one of Allen's ribs punctured his heart and aorta. In an emergency procedure, the rupture was repaired -- but only after Allen flat lined for more than five minutes.

When Allen awoke, he could not walk, talk, brush his teeth or comb his hair. He was held together by four skin grafts and a girdle. He had a trach tube. When he tried to write a question, he wrote continuous letters in a one-inch circle. Allen was told he'd never have the cognitive abilities he once had.

During the past 10-and-a-half excruciating years, Allen proved them wrong.

An environmental systems mechanic at Iowa State before the accident, Allen was a licensed journeyman and master plumber, and certified in HVAC and boiler tech. He owned a house in Ogden and was a volunteer fire fighter for 19 years. He had served as president of the Jaycees and vice president of the Knights of Columbus, was a regular on the Ogden Fun Days Committee and coached his son's flag football team. Recently divorced, Allen had custody of his children, ages 9 to 14. 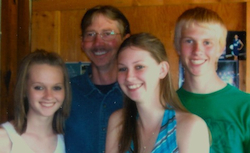 Allen with his children, Cassee, Lynn and Tony in 2008.

He could no longer care for his children or perform even the simplest physical task in his job. His ex-wife took custody of the kids. During years of recovery, Allen sold his home and furniture, and used an insurance policy payout and all of his retirement savings to pay bills. His money ran out in the summer of 2007. He couldn’t pay his rent. He told the disability hearing judge, “You have everything. It’s all gone. I have nothing left.”

All kinds of rehab

Allen doesn’t talk much about the pain, which still haunts him.

“I went through the worst four years of my life. I started using alcohol to ease the mental and physical pain,” he said

His family tried to help (“it tore them apart”), but it wasn’t until he “got tired of being the person I had become” that he sought treatment through a program in Des Moines and Alcoholics Anonymous.

“This month, I’ll have seven years of sobriety. Now I help others get what I have,” he said.

Physical rehab was yet another agonizing ordeal.

“It’s been years of persistence, perseverance and stubbornness,” Allen said.

It started with baby steps. Holding on to the handrail, he walked up a step, maybe two, then back down, while the therapist held on to him with a belt. He couldn’t bend over. He couldn’t raise his arm above his head. There were more surgeries.

From McDonald's to honor society

While hospitalized following the accident, Allen was asked what he'd do if he were physically unable to continue in his job. He said he’d go to college and “get some sort of business degree.”

After futile attempts working part-time in home heating and cooling, Allen took a half-time job at MacDonald’s in 2008. The following year, he tried a night class at Des Moines Area Community College’s urban campus. He continued to work at McDonald’s as he pursued an associate’s degree in business administration at DMACC.

“DMACC Urban offered free tutoring and I asked for a tutor right away. I didn’t know what my brain would do,” Allen said. “And because I’d spent years with pipe wrenches, screwdrivers and diagnostic meters, I knew nothing about typing or using a computer.”

He took advantage of all the help labs and resources offered, and did well in his classes. So well that he was invited to join Phi Theta Kappa, the international honor society of two-year colleges. That opened up the opportunity for scholarships and a four-year degree.

“I thought, ‘If that’s even a possibility, I’m going to do it.’ And it worked. I received a full ride to ISU through scholarships,” Allen said.

It wasn’t an easy ride. Allen calls Iowa State “the big boy school.” He struggled with math, but was not afraid to ask for help — or to offer it. Six months after joining a learning community for nontraditional students, he became a peer mentor. He also advocates for expanding information and resources for ISU's nontraditional students.

“I got a tremendous amount of help at ISU because I asked for it. If you take the time to go to writing labs, and math group sessions, it helps you get through,” he said.

To help with his writing and typing (he’s had surgery on both hands and had four pins in one), ISU’s Student Disability Resources and Vocational Rehabilitation office provided Allen with a smart pen and a voice-activated dictation machine.

But most of all, Allen has worked very hard at Iowa State.

“I can’t study like these other students. I spend hours and hours,” he said.

Now he’s looking for a job that combines his experience as an environmental systems mechanic with the hard-earned, four-year business degree he will receive Dec. 20. He hopes to find one in facilities administration in a college, school or corporation.

“I’ve lost a lot in 10-and-a-half years. I’ve been so focused on my education and stayed away from relationships because I spent so many hours studying. Now I want to get my life back.”

When Keith Allen awoke from a 31-day coma following his catastrophic motorcycle accident, he could not walk, talk, brush his teeth or comb his hair. He was held together by four skin grafts and a girdle. He had a trach tube. When he tried to write a question, he wrote continuous letters in a one-inch circle. Allen was told he'd never have the cognitive abilities he once had. That's when the former Iowa State environmental systems mechanic took the first step in his excruciating journey to prove them wrong. On Saturday, Allen receives his bachelor's degree. 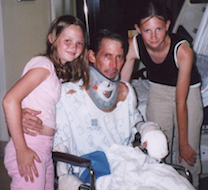 Allen with his daughters five weeks after the accident.

“It’s been years of persistence, perseverance and stubbornness.”