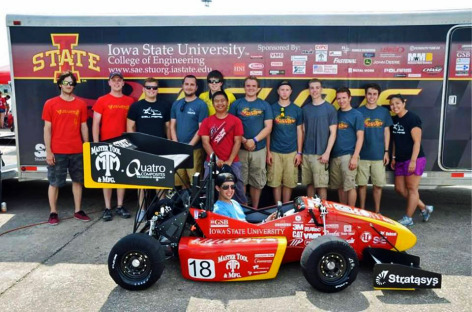 6-22-15 update: The all-important endurance race at the Formula SAE Lincoln competition in Nebraska was off to a great start for Cyclone Racing. The team’s mini open-wheel racing car was turning good lap times. A strong race and a top-10 overall finish were in sight. But then, about halfway through the race, the end blew out of the muffler and all those goals went racing away. The car could still run, but it was in violation of two race rules: It had lost a part during the race and it was too loud. And so officials parked the car and Cyclone Racing dropped to 28th (of 66) in the overall standings. Derek Peters, a team veteran and May graduate who just started an engineering job with Oshkosh Defense in Wisconsin, said it was a disappointing finish. “When you don’t finish endurance, it kills your score.” But, he said, the team has now race-tested some new ideas that should help next year’s team make a good run.

6-8-15 update: When the student-engineers of Cyclone Racing packed up for their return from the Formula North competition, they had to find room for a shiny trophy. The students and their mini open-wheel race car finished third of 17 scored teams at the event in in Barrie, Ontario, Canada. “We had really high rankings across the board,” said team veteran Derek Peters, noting the team finished second in cost, third in endurance and fuel efficiency, fourth in skid-pad performance and fifth in the short autocross race. “It was a good competition for us.” But team members aren’t done working on their car. When they’re back on campus this week, they’ll do some testing and some more engineering. “Hopefully we can make it faster with a little bit of adjustment,” Peters said. The team finishes its racing season June 17-20 at the Formula SAE Lincoln event in Nebraska.

AMES, Iowa – Roger Steinforth has been through all the data from all the computer simulations. And he thinks adding wings to Cyclone Racing’s mini open-wheel racer could cut lap times by a second or two.

That’s a big performance boost for the student-designed and student-built race cars of the formula racing series sponsored by SAE International, formerly the Society of Automotive Engineers.

“Our main goal is to achieve as much downforce as possible with minimal drag,” Steinforth said as he showed off the dual-element wings made from carbon fiber and Nomex®. “We want to improve our top speeds in the turns.”

Adding those wings is a big step for the student-engineers of Iowa State’s Formula SAE Team. Iowa State students haven’t designed and built aerodynamic elements for their race car in years, maybe decades. The wings add weight and complexity to the car. The extra downforce also increases drag and reduces top speeds.

But, after looking at the numbers and the performance of competitors, Steinforth thinks it’s a good move.

“We’ve seen other teams with wings and how cool they were, and all the cool things they could do,” said Steinforth, a senior from Cary, Ill., who’s studying mechanical engineering.

And what are those cool things?

“A lot of it is speed around corners,” he said. “I’m hoping these wings will improve lap times by a second or two per lap. That adds up over an endurance race of 14 miles.”

What about the rest of the car? How is it looking this year?

Derek Peters – a May graduate from Hartley who will soon leave Ames for an engineering job with Oshkosh Defense in Wisconsin – said the team has been careful to learn from past mechanical problems.

Problems with broken fuel injector mounts have been fixed by adding some aluminum pieces to the assembly. The rear dampers have been moved to the top of the suspension so they’re much easier to adjust and maintain. The Yamaha YFZ450R ATV engine has been lowered a bit, dropping the car’s center of gravity and improving turning speeds.

Peters, a former technical director for the team, thinks the tweaks will make a difference when the team competes this week at Formula North in Barrie, Ontario, Canada, and June 17-20 at Formula SAE Lincoln in Nebraska.

“I think we’ll complete every event this year,” he said, noting the competition’s driving events include acceleration, skid-pad performance, fuel economy, a short autocross race and a long endurance race. “I don’t know how high we’ll place, but I don’t think we’ll have the minor problems that have taken us out the last two years.” 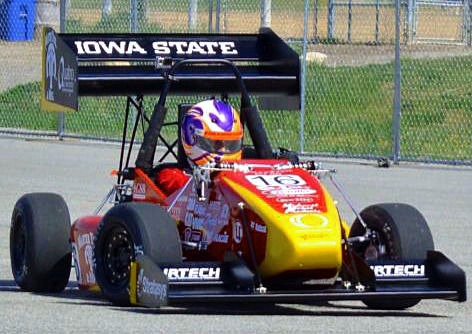 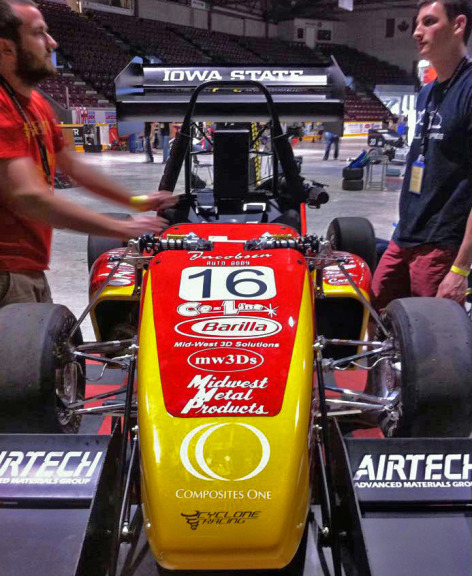 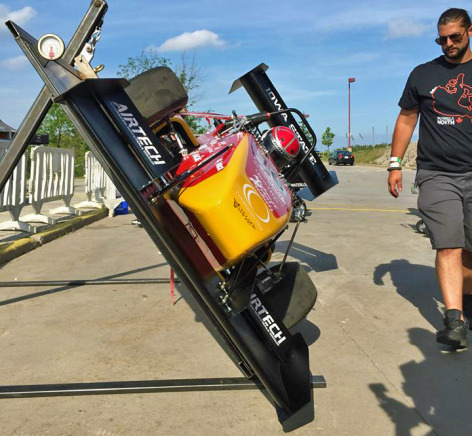 The student-engineers of Cyclone Racing have designed a formula racer with wings for this year’s competitions. The resulting downforce should increase the car's cornering speeds. Larger image. Image courtesy of Cyclone Racing.

Race along with Cyclone Racing at the Formula North competition.

The student-engineers of Cyclone Racing have been busy designing and building wings for their mini open-wheel racing car. Computer simulations say the wings should increase cornering speeds and cut lap times. The students will see what happens on actual race tracks during competitions this month in Canada and Nebraska.

“I’m hoping these wings will improve lap times by a second or two per lap. That adds up over an endurance race of 14 miles.”