AMES, Iowa – A rugged expanse of exposed black dirt at an Iowa State University research farm will soon take on the lush emerald color of the outfield of a professional ballpark.

The four-acre stretch located at the ISU Horticulture Research Station north of Ames will allow researchers to experiment with soil content and management practices to improve sports turf across the Midwest.

A pair of research associates began tearing up the section of ground with a bulldozer last week, moving between 5,000 and 6,000 cubic yards of soil. Once all that dirt’s been leveled, they’ll plant a mixture of primarily Kentucky bluegrass and perennial ryegrass, which is consistent with most sports fields in the Midwest.

They plan for the new turf to stay there for at least the next two decades, providing prime real estate to figure out how to help sports turf stand up to the rigors of high foot traffic and unpredictable weather.

“One of the biggest challenges is traffic,” said Dan Strey, a research associate in the ISU Horticulture Department. “Figuring out how to make the turf thrive while withstanding that kind of use is a big part of the job.”

But the researchers won’t be inviting football or rugby teams to practice on the grass. Instead, they’ll simulate foot traffic with a large machine that utilizes two rollers with spikes drilled into them. The spikes twist as the machine moves across the sod, replicating the movement of athletes as they change directions and dig their shoes into the ground.

Strey said the researchers will also look at best practices to help sports turf withstand the sometimes unpredictable and extreme Midwest weather. He said temperatures above 90 degrees combined with the wear and tear of athletic competition often lead to stressed grass that thins or becomes susceptible to disease. 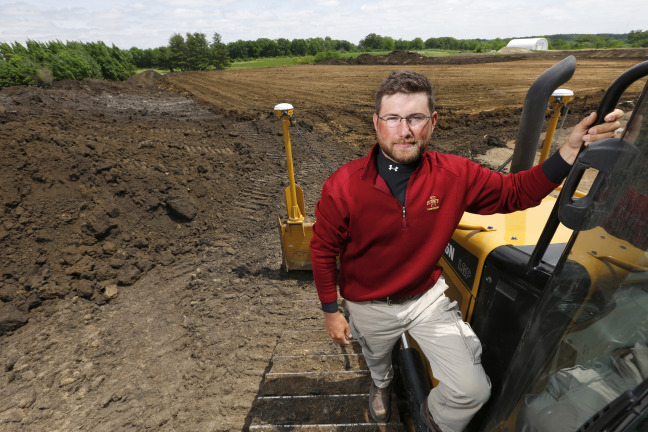 They’ll also experiment with soil characteristics to simulate common practices at all levels of competition, from local parks to high school, collegiate and even professional sports venues.

“This research will be designed to help the industry as a whole,” Strey said. “We’re going to cover a lot of bases to study conditions that are identical to what you see in virtually any sport that’s played on natural grass around here.”

Just north of the newly broken ground, in an adjacent plot, managers nurture an area of turf designed to replicate the fairways and greens of a golf course. The golf turf research goes back decades at the horticulture farm, and Strey said the new project will share a similar approach. But many of the specifics of golf turf won’t apply to the new research, he said.

For instance, the golf turf meets many requirements mandated by the U.S. Golf Association regarding irrigation, drainage and soil composition.

“We’ll be looking at a lot of different applications that sports turf managers will be interested in across a number of sports,” Strey said. “Pretty much anything played on grass besides golf will factor into what we’re doing.” 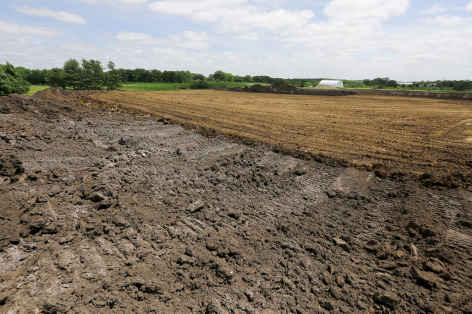 A four-acre expanse at the ISU Horticulture Research Station north of Ames is being converted into space for sports-turf research. Photo by Christopher Gannon. Larger image.

A four-acre stretch of land at the ISU Horticulture Research Station north of Ames will allow ISU researchers to experiment with soil content and management practices to improve sports turf across the Midwest.

“This research will be designed to help the industry as a whole. We’re going to cover a lot of bases to study conditions that are identical to what you see in virtually any sport that’s played on natural grass around here.”