Aphids are striking soybeans earlier than expected, according to Iowa State University entomologist 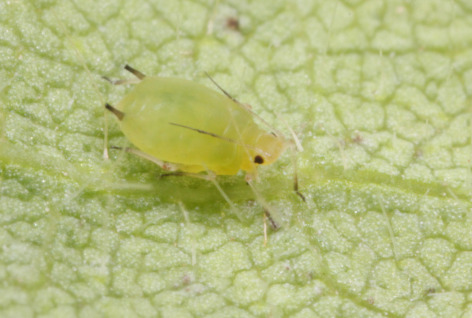 Soybean aphids, like the one pictured here, are appearing earlier than usual. Photo courtesy of ISU Extension and Outreach. Larger image.

AMES, Iowa – Aphids, the tiny insects that can overwhelm soybeans and reduce yields, are appearing earlier than in previous years, according to an Iowa State University entomologist.

Yet aphids represent only one of several threats soybean farmers face right now. Growers will have to deal with perennial pests such as soybean cyst nematodes and relatively new threats including a complex of fungi known as Diaporthe. Wild swings in weather and precipitation may exacerbate some problems while holding others in check.

But farmers can avoid the major pitfalls presented by diseases and pests through quick diagnosis, vigilance and smart management, ISU experts said this week.

Erin Hodgson, an associate professor of entomology, said she’s received reports that producers in Wisconsin, Minnesota and northeastern counties in Iowa are treating soybeans for aphids, about two weeks ahead of when the pests became problematic last year.

Hodgson said she can’t say for certain why aphids appear to be running ahead of schedule, but she recommended farmers stay vigilant.

“Not every field is going to see aphids, and an infestation may be variable even when comparing sections of a single farm,” she said. “Producers should be manually walking their fields and inspecting the plants for aphids. You can’t see them just driving by.”

Aphids have specialized mouths, known as stylets, that pierce into the soybean plants and suck out sap. That leads to dehydration of the soybeans, which can cause yield losses of up to 40 percent in severe cases, Hodgson said.

A few aphids on a plant won’t cause appreciable damage, but if the population reaches around 250 aphids per plant, Hodgson recommends farmers consider treating their fields with a pesticide. The insects reproduce quickly – up to 15 generations in a single growing season – so 250 aphids on a plant can multiply into 650 in a hurry. And that’s where yield losses begin to take effect, she said.

Daren Mueller, an assistant professor of plant pathology and microbiology, said Iowa soybeans have suffered environmental stress in recent years that leaves them more susceptible to pests and disease.

Weather patterns in recent years have swung from abnormally wet and cool to abnormally hot and dry, sometimes in the same growing season.

“Every year for the past several years, there’s some sort of extreme weather event that favors the emergence of certain diseases,” Mueller said. “At some point, there’s an extraordinary stress placed on the crops.”

Mueller noted a complex of fungi known as Diaporthe as a growing concern for soybean farmers, in part due to wet conditions in the spring and at various points during the growing season. Diaporthe requires moisture to infect soybeans, and it can cause blight, seed decay and stem canker, he said.

That means farmers should monitor their fields closely and get any problems diagnosed as quickly as possible.

Soybean cyst nematodes (SCN), which are tiny parasitic roundworms, have posed problems for producers for years. But Greg Tylka, a professor of plant pathology and microbiology, said these nematodes are growing increasingly resistant to the most common tool used to combat them, soybean varieties developed with a breeding line known as PI 88788.

Of the 818 soybean varieties available to Iowa farmers last year, only 15 didn’t rely on PI 88788 for nematode resistance, Tylka said. So as PI 88788 grows less effective in fighting soybean cyst nematodes, producers don’t have many other options at their disposal, he said.

“For about 20 years, almost every SCN-resistant variety being planted used that one source of resistance,” he said.

Some producers make use of seed treatments that help to some extent, but Tylka cautioned that those treatments won’t completely stop yield losses.

Roughly three out of every four soybean fields in Iowa have soybean cyst nematodes, he said. The pests do the most damage in years that see high temperatures and little rainfall, so this year’s wet conditions likely mean yield losses won’t reach disastrous levels. Still, yield losses could range between 5 and 15 percent depending on local conditions, Tylka said.

“This year’s damage from soybean cyst nematodes will be less than previous years when we had drier weather,” he said. “But no matter what the weather conditions, the pests are so widespread that they will reduce yield to some degree.”

Soybean producers are dealing with a range of challenges this growing season, from perennial pests to new threats to environmental stress. ISU experts are urging producers to emphasize vigilance and early diagnosis of problems.

“Not every field is going to see aphids, and an infestation may be variable even when comparing sections of a single farm. Producers should be manually walking their fields and inspecting the plants for aphids. You can’t see them just driving by.”