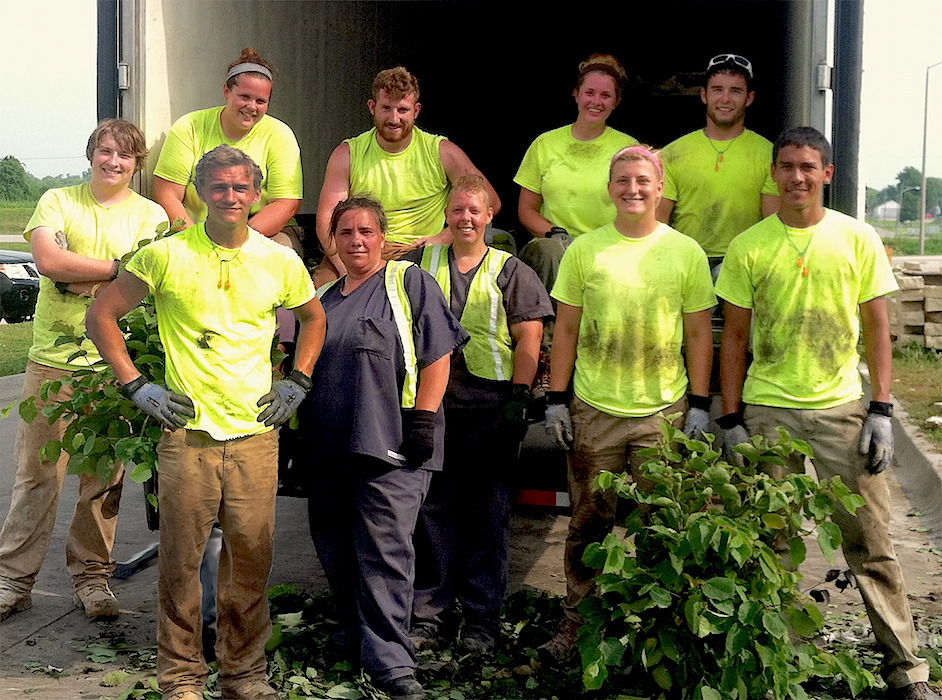 2014 crew of ISU students and offenders at the Iowa Correctional Institution for Women. Contributed photo.

Iowa State's is one of four awards of excellence presented in six categories. A total of 23 student awards were selected from more than 327 entries representing 84 schools. Awards will be presented during the ASLA Annual Meeting and EXPO in Chicago Nov. 9. Winning entries are featured in the October issue of Landscape Architecture Magazine.

"ASLA presents several honor awards each year, but they are not required to give the Award of Excellence," Stevens said. "This significant recognition acknowledges the great work our students are doing with underserved people in our state and illustrates the profession's commitment to environmental justice, advocacy and student learning."

Founded in 1899, the American Society of Landscape Architects (ASLA) is the national professional association for landscape architects, representing more than 15,000 members in 49 professional chapters and 76 student chapters

Landscape architecture alumni who worked on the project in 2013 are Tara Bounds, Nicholas Gulick, Colten McDermott, Branden Pentico, Nate Schlorholtz and Meredith Ver Steeg. And Garret Munch, Nick King, Chad Hunter and Colby Fangman were respopnsible for the master plan and outdoor classroom plans at the earliest stages of the project.

In 2010, the Iowa Department of Corrections contacted the university with the idea to engage students in the landscape design for a $68 million expansion and modernization of the crowded, antiquated ICIW.

Stevens' and her students developed a plan for the 30-acre campus that went far beyond visuals. Their overall goal was "to redefine the prison environment as a more humane and therapeutic landscape, one that mutually improves human and environmental health, promoting resiliency in both." After conducting focus groups and discussions with the offenders and staff, they worked side-by-side with offenders to construct the exterior spaces and plant the grounds.

Two of the classrooms are bordered by limestone seat walls and accommodate a typical treatment class of 40 women. They have been used for role-playing, writing and reflection activities. A larger, tiered classroom has been used for graduation and memorial ceremonies. The popular lawn mound is the only space where offenders are allowed to sit on the grass. The aspen grove offers the offenders a rare opportunity to be alone. The women use the limestone cube seating to read, journal or participate in counseling sessions.

In the 2014 design-build project, students and offenders created an outdoor restorative space for staff and officers. They also planted 260 trees and about one acre of native prairie flowers and grasses. In focus groups with staff, students learned about the daily job stressors and mental fatigue associated with working in a prison. Constructed adjacent to the main administrative building, the decompression deck is a three-tiered terrace that provides spaces for individuals and groups, a cooking terrace for staff barbeques, planted screen walls for privacy and trees for shade.

Because of the award submission deadline, this year’s projects—a nearly one-acre production garden of vegetables and herbs, and a healing garden for the prison’s special needs population—were not included in the entry.

Tara Bounds, who worked on the ICIW project in 2014 and 2015, prepared the entry packet for the award —a 24-page binder and its digital version. She also designed and supervised the prairie plantings and the windbreak included in the winning project. Bounds graduated with a master’s of landscape architecture degree in August, and is the conservation communities specialist for Hubbell Realty in Des Moines.

Department of Corrections administrators have said they expect the ongoing landscape project to become a national model for creating humane and restorative landscapes in a restrictive environment.

“The environment we give the women makes a difference in their attitudes and mentality,” said ICIW Warden Patti Wachtendorf. “The women here are learning a lot and taking some ownership” of the areas they’ve helped construct, she said. “The Iowa State project has completely exceeded my expectations.”

From start to finish 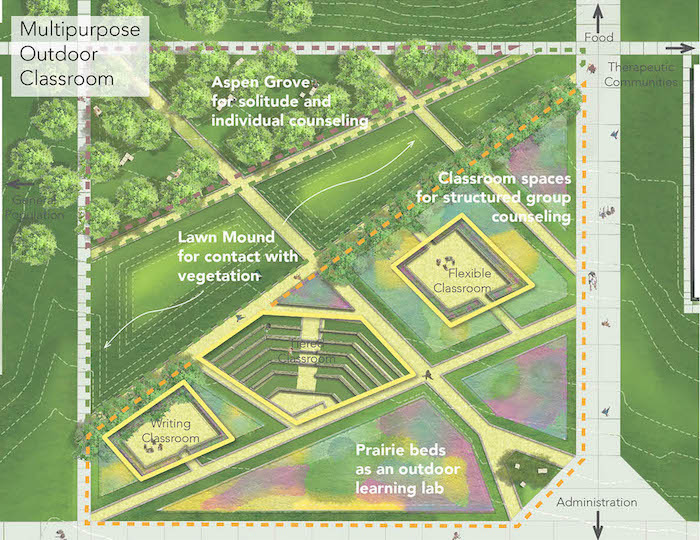 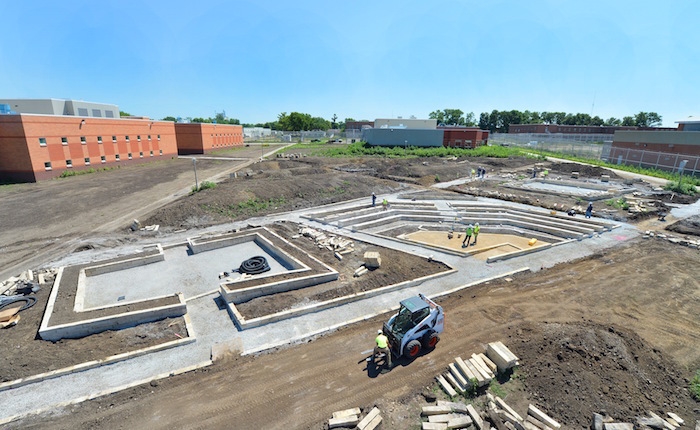 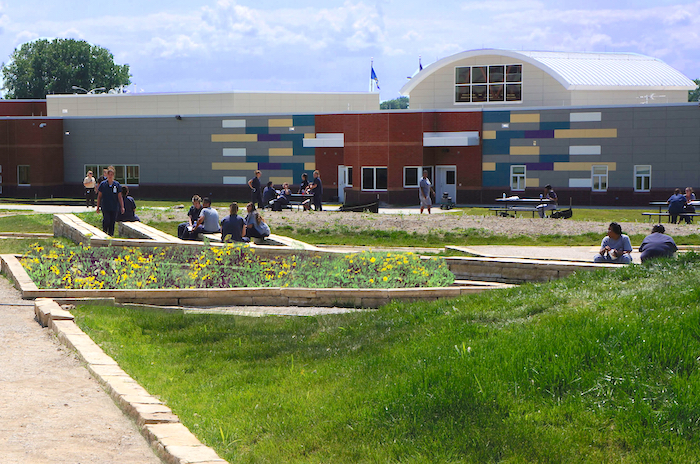 Classrooms in use. Contributed photo.

An Iowa State University landscape architecture student project has won the Community Service Award of Excellence from the American Society of Landscape Architecture (ASLA). The national award honors the ongoing landscape project at the Iowa Correctional Institution for Women (ICIW) in Mitchellville, Iowa, led by Assistant Professor Julie Stevens. The entry, "Landscapes of Justice: Redefining the Prison Environment," focused on work completed in 2013 and 2014. Iowa State's is one of four awards of excellence presented in six categories. A total of 23 student awards were selected from more than 327 entries representing 84 schools. 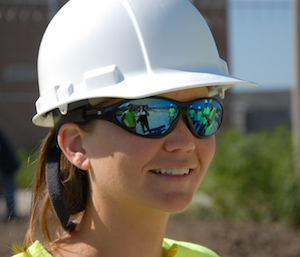 "This significant recognition acknowledges the great work our students are doing with underserved people in our state and illustrates the profession's commitment to environmental justice, advocacy and student learning."