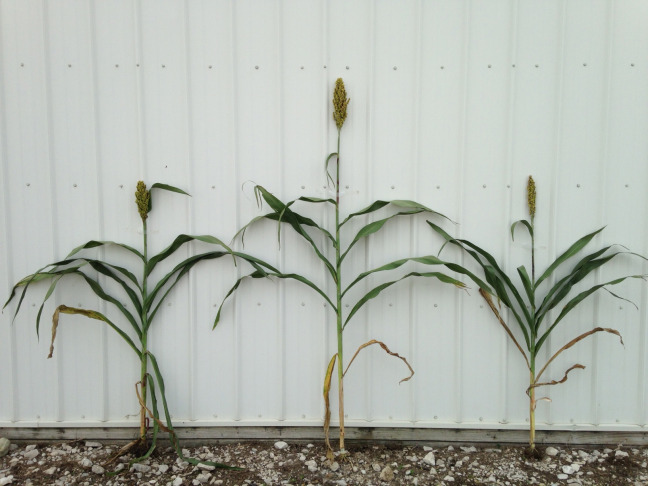 Heterosis accounts for why a sorghum hybrid may grow taller than either of its parent varieties. Larger image. Photo courtesy of Jianming Yu.

AMES, Iowa – An Iowa State University agronomist has helped uncover the genetic mechanisms in sorghum plants that allow hybrids to perform better than parent varieties, a process known as heterosis.

The new study fills in some of the gaps that have nagged scientists for years and could lead to more precision in plant breeding, said Jianming Yu, an associate professor of agronomy and the Pioneer Distinguished Chair in Maize Breeding.

The precise genetics that that drive heterosis are only partially understood, so Yu worked with colleagues at Kansas State University to pin down how heterosis works regarding plant height in sorghum plants. The research was published recently in the peer-reviewed Proceedings of the National Academy of Sciences.

“The mechanisms behind heterosis have been debated for a long time, but there haven’t been a lot of concrete answers,” said Xin Li, the first author and a graduate student in agronomy. “For this paper, we tried to show specifically what is happening with plant height in sorghum. It’s an example that illustrates the theory.”

Where does that extra height come from if not from either parent?

Yu explained that the genes of inbred plants – or plants produced from the same parent variety – sometimes cancel each other out. Combining the right varieties means those genes are no longer canceling each other out, unleashing the potential for desirable traits to manifest in the hybrid, Yu said.

He also said multiple genes govern a sorghum plant’s total height. For instance, some genes may only influence the base of the plant, while other genes affect the entire plant. Untangling all those connections also points to how hybrids may outperform both parent varieties, he said.

The findings could pave the way for faster and more focused advances in developing varieties for a range of crops. Yu said that gaining a better understanding of heterosis will take some of the guess work out of plant breeding.

“If you understand the genetics, you don’t have to make random crosses of hybrids and see if you get the traits you want,” he said.

The research was supported by the Binational Agricultural Research and Development Fund, U.S. Department of Agriculture’s National Institute of Food and Agriculture, Kansas State University’s Center for Sorghum Improvement and the ISU Raymond F. Baker Center for Plant Breeding.

A new ISU study of sorghum explores the genetics of heterosis, the process by which hybrid plants perform better than the parent varieties used to create them.

“The mechanisms behind heterosis have been debated for a long time, but there haven’t been a lot of concrete answers. For this paper, we tried to show specifically what is happening with plant height in sorghum. It’s an example that illustrates the theory.”

Xin Li, graduate student in agronomy and first author of the study