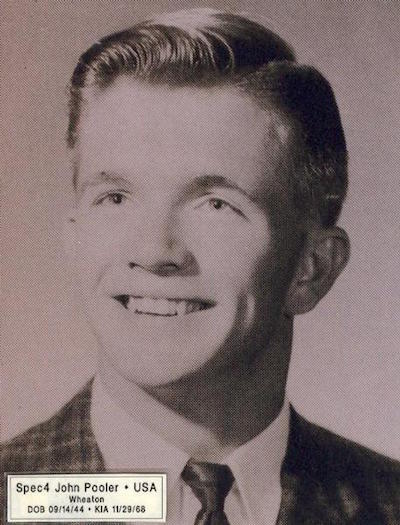 AMES, Iowa – In a Veterans Day observance, Iowa State University will honor a soldier from Wheaton who lost his life in 1968 during the Vietnam War.

John Shelby Pooler and two other former Iowa State students who died in military service will be recognized during the Gold Star Hall Ceremony, 3:15 p.m. Monday, Nov. 9, in the Memorial Union Great Hall on the university's campus. It is free and open to the public.

Although Pooler's name was previously engraved on the memorial wall, he has not been honored in a ceremony. He will be remembered with another ISU fallen soldier who died during the same battle. Much of Pooler's history was gathered from a story written by a fellow soldier, Tom Summerhauser, called "Thanksgiving Day Miracle."

Pooler was born Sept. 14, 1944. He majored in English at Iowa State where he was a member of Delta Sigma Phi. Pooler was drafted and served in the U.S. Army with a rank of Specialist 4. He was in the A Company, 2nd Battalion, 2nd Infantry, 1st Infantry Division.

Pooler completed Advanced Infantry Training at Ft. Ord, California, with his friend Ronald Chavez, who remembers Pooler as being "a strong, dedicated, brave American soldier." According to Chavez, he and Pooler "were assigned to the Big Red One — 1st Infantry Division as riflemen." They reported to Long Binh where they were assigned to different companies. Shortly after his arrival in Vietnam on Aug. 29, 1968, Pooler's company was involved in the fourth battle of Loc Ninh in the Phuoc Long Province.

After surviving the first day of battle, Thanksgiving Day 1968, Pooler lost his life the following day, Nov. 29, while attempting to save the life of a fellow soldier, Jesus Quinene Meno. The fighting was intense, conducted at close range and the enemy was strongly entrenched.

According to Summerhauser, instead of calling for a medic and moving forward, Pooler stopped in "the worst place to be in during a gunfight ... where the wounded lie because someone is shooting at that place.

“John didn’t have to stop. His job was to call 'Medic' and keep going, but he stopped," Summerhauser recalled. While tending to Meno's “horrible” wound, Pooler was killed by “one clean bullet through his heart.” He was 24 years old at the time of his death.

Summerhauser, who survived the battle, recounts that a member of Pooler's basic training class, Tom Firmin, knew Pooler as "an English teacher... quiet and private." Nevertheless, Pooler proved he was a heroic soldier in battle. 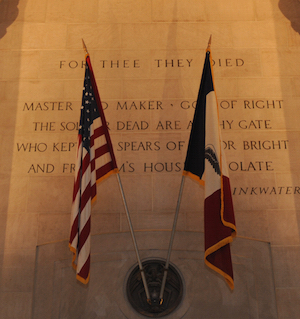