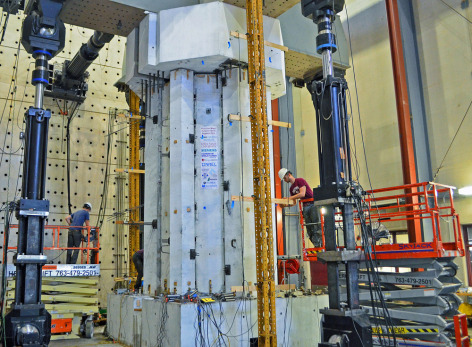 In Iowa State University’s Structural Engineering Research Laboratory, an actuator rocked a 12-foot-high and 6.5-foot-wide test section with 100,000 pounds of force every 1.25 seconds. The test section’s two panels and two columns only moved a tenth of an inch, but the movement was visible – especially the swaying of the long wires attached to 65 strain and displacement sensors.

Those sensors collected data 50 times every second over weeks of fatigue testing. Meanwhile, Hartanto Wibowo, an Iowa State postdoctoral research associate, was on the lookout for tiny cracks or any other signs of wear in the test section, particularly around the prestressing cables connecting the panels and columns.

An experiment at the University of Minnesota’s MAST Laboratory tested operational and extreme wind turbine tower loads on a full-scale cross section of a tower – an assembly that was 16 feet 7 inches high, 8 feet in diameter and included six panels and six columns tied together with prestressing cables. Engineers took data to see if the assembled tower pieces would hold up under the loads and whether they’d transfer the load from piece to piece and act as a single unit.

Sri Sritharan, Iowa State University’s Wilson Engineering Professor in Civil, Construction and Environmental Engineering and a member of the College of Engineering’s Wind Energy Initiative, said the tower cross section had no trouble resisting the loads and preliminary data analysis confirms that observation.

The fatigue test is ongoing with no damage detected after nearly 200,000 load cycles.

“It’s fair to say these tests were a success,” Sritharan said. “I think we’ve made great progress in validating a new concept of using prefabricated concrete for taller wind turbine towers.”

The test sections aren’t anything like the 80-meter steel wind turbine towers you see all over the Iowa countryside. They’re easily transportable precast columns and panels made from high-strength or ultra-high-performance concrete. Those columns and panels are tied together by cables to form hexagon-shaped cells that can be stacked vertically to form towers as tall as 140 meters.

Current research and development of the Hexcrete towers is supported by an 18-month, $1 million grant from the U.S. Department of Energy, a grant of $83,500 from the Iowa Energy Center and $22,500 of in-kind contributions from Lafarge North America Inc. of Calgary, Alberta, Canada. The project’s industry partners also include the Siemens Corp.’s Corporate Technology center in Princeton, New Jersey; Coreslab Structures (OMAHA) Inc. of Bellevue, Nebraska; and BergerABAM of Federal Way, Washington.

“Now our goal is to build a full tower in the field,” Sritharan said. “Our intent is to identify partners who can work with us on a prototype tower. We’ll also work to develop a commercialization plan.”

To advance those efforts, Sritharan’s research group will host technical and commercialization workshops next year. Check the project website for more information.

Iowa State University engineers are testing new concrete technology for taller wind turbine towers. The idea is to find a way to build taller towers that can be easily transported and assembled on site. The towers could reach much higher than today's 80-meter steel towers, providing energy companies access to the faster and steadier winds above 100 meters.

“It’s fair to say these tests were a success. I think we’ve made great progress in validating a new concept of using prefabricated concrete for taller wind turbine towers.”

“Now our goal is to build a full tower in the field. Our intent is to identify partners who can work with us on a prototype tower. We’ll also work to develop a commercialization plan.”