AMES, Iowa — Iowa State University’s undergraduate programs in landscape architecture and architecture are ranked in the top 20 in the nation, according to a new survey of practitioners by DesignIntelligence.

DesignIntelligence is a bimonthly publication for leaders in design professions. The magazine’s annual report, “America’s Best Architecture and Design Schools,” is the only national college ranking survey that focuses exclusively on design. Rankings cover accredited programs in architecture, industrial design, interior design and landscape architecture. Published in the November-December issue of DesignIntelligence, the 16th annual survey was conducted in mid-2015 on behalf of the Design Futures Council.

The DesignIntelligence survey ranks programs from the perspective of leading practitioners. Leaders in more than 1,425 professional firms and corporations who have direct experience with the hiring and performance of recent graduates participated in this year’s survey. They were asked the following question: In your firm’s hiring experience in the past five years, which schools are best preparing students for success in the profession?

When all firms participating in the national survey ranked the Midwest’s top schools for undergraduate landscape architecture, Iowa State tied for second with Ball State. In this survey, the Midwest includes nine undergraduate programs in Illinois, Indiana, Iowa, Michigan, Nebraska, North Dakota, Ohio and Wisconsin. Other Midwestern states have only graduate programs.

In a separate DesignIntelligence survey of current students, 97 percent of the Iowa State landscape architecture students who responded said they “believe they’ll be well prepared for their profession upon graduation.” All respondents also rated the program’s quality to be excellent (66 percent) or above average (34 percent).

The ISU landscape architecture department has 154 undergraduate majors and 19 faculty.

For 2016, Iowa State’s undergraduate architecture program ranked 20th. It has ranked in the top 20 for 11 of the past 13 years. The list this year was headed by Cornell University; followed by California Polytechnic State University, San Luis Obispo; and Virginia Tech. There are 48 accredited undergraduate architecture programs in the U.S., one in Puerto Rico and one in the United Arab Emirates (American University of Sharjah).

In the regional rankings, Iowa State was third in the Midwest based on all responses from firms nationwide. In this survey, the Midwest includes four undergraduate programs in Illinois, Indiana, Iowa and Missouri; other Midwestern states have only graduate programs.

In the student survey, 96 percent of the Iowa State architecture students who responded said they “believe they’ll be well prepared for their profession upon graduation.” Ninety-six percent of respondents also rated the program’s quality to be excellent (66 percent) or above average (28 percent).

There are 308 undergraduate majors and 39 faculty in architecture at Iowa State. 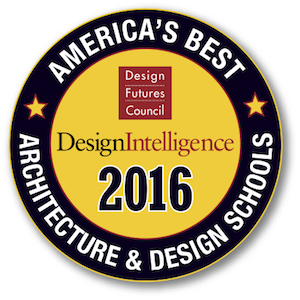