Saujani's presentation, "Women Who Don't Wait in Line," will be at 8 p.m. Thursday, Jan. 28, in the Memorial Union Great Hall. It is free and open to the public.

Saujani is the founder and CEO of Girls Who Code, a national, non-profit organization working to close the gender gap in technology and prepare young women for jobs of the future. Her new book, "Women Who Don't Wait in Line," advocates for a new model of female leadership focused on embracing risk and failure, promoting mentorship and sponsorship and boldly charting one's own course — personally and professionally.

After years of working as an attorney, activist and fundraiser, Saujani left her private sector career behind and entered politics as the first Indian American woman to run for the United States Congress.

Following the highly publicized race, Saujani continued in public service, becoming deputy public advocate of New York City. Most recently, she ran a spirited campaign for public advocate on a platform of creating educational and economic opportunities for women and girls, immigrants and those who have been sidelined in the political process.

Saujani is a graduate of the University of Illinois, Harvard’s Kennedy School of Government, and Yale Law School. She has been named one of Forbes' Most Powerful Women Changing the World, Fast Company's 100 Most Creative People, Ad Age's Creativity 50 and Business Insider's 50 Women Who Are Changing the World.

Saujani's talk is co-sponsored by the colleges of Business and Liberal Arts and Sciences; departments of Computer Science and Supply Chain and Information Systems; Digital Women; Engineers' Week; Information Technology Services; Program for Women in Science and Engineering (WiSE); Women's and Diversity Grant; and the Committee on Lectures, which is funded by Student Government. 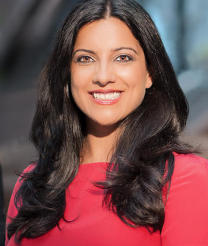