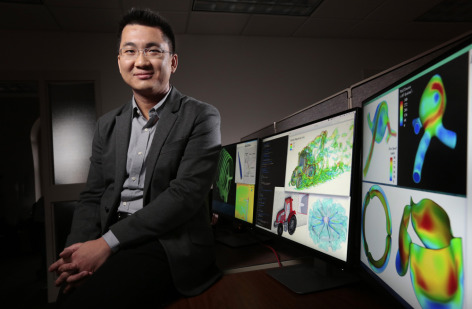 Iowa State's Ming-Chen Hsu is developing a computational toolkit to improve the design, engineering and operation of all kinds of machines. Larger photo. Photo by Christopher Gannon.

And then Ming-Chen Hsu, an Iowa State University assistant professor of mechanical engineering, searched his computer for another video and clicked play.

This time the tip of a wind turbine blade appeared on his monitor, constantly moving, flexing and vibrating as the blade rotated around the rotor hub. Red indicated air moving at a relative speed of 52 meters per second over the top of the blade; blue and green marked the slower air around the blade.

These are computer models featuring technologies called computational mechanics, fluid-structure interaction and isogeometric analysis. They show the flow fields and stresses that mechanical systems have to withstand. And they’re part of a toolkit Hsu and his research group are developing to improve the design, engineering and operation of all kinds of machines.

“If we are able to use computers to model and simulate these engineering designs, we can save a lot of time and money,” Hsu said. “We don’t have to build and test every prototype anymore.”

Hsu said it would be impractical, for example, for the wind energy industry to build and test full-scale prototypes of each and every idea for improving the performance of wind turbines.

Using the models, “We can predict the real physics of the problems we are looking at,” he said.

And so those videos showing blood flowing through an artificial heart valve or the vibrations of a wind turbine blade are a lot more than colorful graphics. To engineers, they can be as good as full-scale prototypes for studying durability and performance.

He’s been at Iowa State since the fall of 2013 and has built a research group that currently includes doctoral students Austin Herrema, Chenglong Wang, Michael Wu and Fei Xu plus undergraduate student Carolyn Darling. The group is now working on two wind turbine studies and an engine project:

Hsu, who teaches courses in fluid mechanics, said the modeling can be applied to all sorts of questions about a machine. In wind turbines, for example, the models can provide answers about material stress and fatigue, rotor aerodynamics, blade design, the wake behind turbines and power efficiency.

“Ten to 15 years ago, computational fluid-structure interaction was new to everyone,” Hsu said. “But with the success of this field, more and more methods are being picked up by industry. Our computational methods are improving engineering designs.”

Iowa State's Ming-Chen Hsu and his research group are developing computer modeling technologies that help engineers design better machines. The models are being applied to wind turbines, artificial hearts and gas turbines. Hsu said the models can save time and money by replacing the production and study of prototypes.

“Ten to 15 years ago, computational fluid-structure interaction was new to everyone. But with the success of this field, more and more methods are being picked up by industry. Our computational methods are improving engineering designs.”