AMES, Iowa — In a groundbreaking six-year project, the Gallup Poll conducted tens of thousands of interviews with Muslims throughout the world, focusing on issues of gender justice, terrorism and democracy. The research-based findings are explored in a documentary film that will be screened at Iowa State University.

"Inside Islam: What a Billion Muslims Really Think" will be shown at 7 p.m. Monday, Feb. 22, in the Great Hall of the Memorial Union. A panel discussion will follow with panelists Miriam Amer, executive director of the Council on American-Islamic Relations—Iowa; Sal Syed, Islamic Center of Ames; Arnesa Buljusmic-Kustura, executive director of the Bosniak American Association of Iowa; Ako Abdul-Samad, a member of the Iowa House of Representatives since 2007; and James Broucek, ISU assistant professor of religious studies. The event is free and open to the public.

Gallup researchers began by asking the questions on every American’s mind. Why is there so much anti-Americanism in the Muslim world? Who are the extremists and how do Muslims feel about them? What do Muslims like and dislike about the West? What do Muslim women really want? The result is a statistical, fact-based study of the actual views of the world's Muslims analyzed by professional researchers rather than pundits.

The event is co-sponsored by the Asian American Studies program, the College of Liberal Arts and Sciences, the Department of Philosophy and Religious Studies and the Committee on Lectures, which is funded by Student Government. 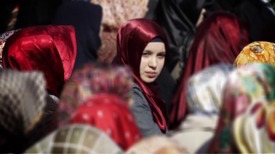 "Inside Islam: What a Billion Muslims Really Think"
Documentary film and panel discussion