Go inside the studio with Iowa State design students as they build an interactive pavilion for the 80/35 Music Festival. Video by Dave Olson

Flux Pavilion will be located across 13th Street near Proof restaurant, in the festival’s free public area outside the paid gates. Whether passing through the pavilion or walking around it, festivalgoers will be greeted by an array of hundreds of tiny lights. With each step taken, the lights mimic each visitor's movement. When the surrounding music changes tempo, the lights join in rhythm.

The pavilion was created this spring by design students in the Fabricating Potentials studio taught by Shelby Doyle, Daniel J. Huberty Faculty Fellow in Architecture. But the biggest challenge, Doyle said, is happening this week.

After the students fully assembled and tested the 10-by-20-foot pavilion, lights and graphics in May, it was dismantled for transport to Des Moines. Now, several students are rebuilding the entire structure on the 80/35 grounds in Western Gateway Park.

An opening reception will be held from 6 to 9 p.m. on Friday, July 8. Doyle and the students who designed Flux Pavilion will be on site to greet visitors and answer questions.

After the festival, they will take it apart again to donate modules — including several plywood-and-Tyvek boxes, a microcontroller board and LED strips, and instructions for assembly and coding — to central Iowa high schools for use in their technology classes.

Whitehead called Amedeo Rossi, a friend and 80/35 project manager, and asked if he would be interested in a student-built visual interaction pavilion at the 2016 festival. Rossi was immediately intrigued.

“We work with several artists and designers each year to have some sort of artistic element at the festival,” Rossi said. “The pavilion sounded like a neat design element that would push the envelope. The festival grounds are right next to the sculpture gardens, so in a lot of ways, it will be similar to the sculptures with which people already interact.” 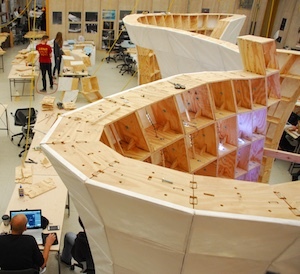 Doyle created the upper-level studio so students could learn to use computational design and digital fabrication to produce a small, temporary structure.

After the students researched materials, different digital interaction strategies, and responsive sound and light, the design was developed by working iteratively between digital designs and full-scale mock-ups.

The resulting design for the pavilion features creative use of material, space, light and sound to provide a unique interactive experience for 80/35 attendees. The curving structure cantilevers toward the top, which provides structural stability and shade, while adjacent benches create a base and offer a place for visitors to rest as they enjoy festival activities. Made from plywood boxes and Tyvek skin, the pavilion’s individual pieces were cut on a CNC (computer-numerical-controlled) router, then assembled by hand via a tab-and-groove system.

“The pavilion is fully scripted, meaning every piece was developed via code on the computer,” said Kyle Vansice, Ankeny, who earned his Master of Architecture degree in May. Because the pavilion was designed via computer, each box could be uniquely calibrated to optimize for structure, shade or seating. 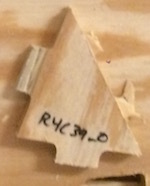 “There are 6,500 pieces,” Vansice said. “No tab and groove are the same. Everything has to be numbered and oriented properly according to the computer or it doesn’t get assembled correctly. We had to trust the system.”

Structure responds to music and dancers

But the pavilion isn’t only an architectural build. LED strips between the Tyvek walls turn the space from a purely structural experience into a sensory one. Programmed by microcontrollers set to respond to sound, the lights will change colors with the beat of music being played at the festival.

Perhaps the most interactive aspect of the pavilion is its use of the Microsoft Kinect, a depth camera that captures the movement of figures in its view. On a screen next to the pavilion, projected graphics—called “projection mapping”—will mimic the motion of people in front of it.

“You can dance in front of the Kinect and it will pick up your shape,” said Tom Bos, a second-year industrial design graduate student from Des Moines. “We take that information, apply filters, and the result is mini-points that mimic your movements.”

Another software program allows Bos to change the color and form of the projection to match changes in music.

“When you look at a stereo, you can see visuals of the sound levels going up and down. We use those as data sources, so as the bass kicks, you can change the size, color or movement of the graphics,” he said.

Bos said he’s looking forward to the rebuild and feels fortunate to have been able to enroll in such a groundbreaking studio.

“It’s been one of the best studios I’ve taken at ISU,” he said. “Shelby really pushed for digital fabrication at the college, and what she brought to the situation was so unique for the university. She gave us an opportunity that really did not exist here before.”

The Fabricating Potentials studio was supported by OPN Architects, a studio outreach grant from the Fieldstead and Company Endowment for Community Enhancement, the Stan G. Thurston Professorship in Design Build, the College of Design, the Department of Architecture and the Des Moines Music Coalition 80/35 Music Festival.

Visitors to the 80/35 Music Festival in Des Moines can enjoy a visual- interaction pavilion designed and built by Iowa State University design students. The serpentine-shaped structure offers shade, seating and a sensory experience that blends music, light and color. Design students in the Fabricating Potentials studio created the 10-by-20-foot pavilion this spring. After they fully assembled and tested it in May, it was dismantled for transport to Des Moines and reassembly at the festival. 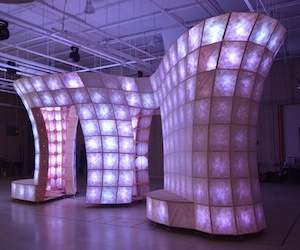 “The pavilion sounded like a neat design element that would push the envelope. The festival grounds are right next to the sculpture gardens, so in a lot of ways, it will be similar to the sculptures with which people already interact.”