Discovery could lead to treatment to better regulate insulin 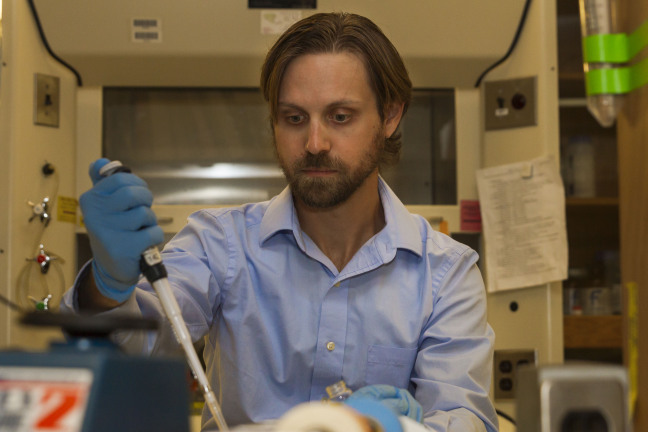 Iowa State's Rudy Valentine is part of a team of researchers to identify a protein that impairs insulin signaling and puts diabetics at risk for other complications. (Larger image) Photo by Wyeth Lynch

AMES, Iowa – Medication can help trigger the enzyme that kick starts insulin production in the body, but the drugs don’t always work for those who are obese or diabetic, and most need to regulate their glucose and insulin levels. That’s why a recent discovery made by Rudy Valentine and a team of researchers holds so much promise.

The team has spent years studying the enzyme AMP-activated protein kinase or AMPK – a main energy sensor in the body. Valentine, an assistant professor of kinesiology at Iowa State University, says AMPK is reduced in obese and diabetics, putting them at risk for metabolic complications, such as stroke, heart disease and some forms of cancer.

Researchers know a lot about how to activate this enzyme, but are working to understand why AMPK is being reduced, he said. By examining the molecular and cellular process, Valentine and his colleagues at Boston University School of Medicine and Harvard Medical School came up with another piece of the puzzle. They found the protein PKD1 may limit AMPK’s activity, which leads to impaired insulin signaling in the muscle, a hallmark of diabetes, Valentine said. The results were published earlier this year in The Journal of Biological Chemistry.

“It’s a pretty technical process,” he said. “There are probably a lot of different molecules that are also involved in this process, but this is definitely one of the mechanisms by which the molecule AMPK is downregulated.”

One way to help understand the process is to think of AMPK as a commuter train or bus you take to and from work. PKD1 is like a construction project blocking the exits from the road or tracks and backing up traffic. In your body, PKD1 slows the cells that remove glucose from the bloodstream causing a “back up” or increase of blood glucose, which has significant consequences. Valentine says it’s also similar to trying to accelerate with your foot on the brake and PKD1 is the brake.

Once researchers identified PKD1 as a potential problem, they took two different approaches – one using medication and the other involved gene silencing to inhibit PKD1 – to determine if it’s possible to restrain or prevent the enzyme from limiting AMPK. Valentine says they’re encouraged by the fact that lowering PKD1 by both approaches effectively restored AMPK activity and insulin signaling. The next step is to determine if existing drugs or modifying certain drugs may be an effective treatment option.

Exercise may also have potential

As an exercise physiologist, Valentine is interested in the impact of physical activity and nutrition in this process. Researchers know that when AMPK is activated it helps the body realize the metabolic benefits of exercise, which can improve insulin sensitivity. Valentine says diet may also play a role.

“We want to know if there are lifestyle things people can do such as nutraceuticals and certain foods that can inhibit this enzyme and lead to more activation of AMPK and improve insulin sensitivity,” Valentine said.

Exercise may not be a practical solution for people with physical impairments or other health issues. However, Valentine says the work may help identify areas they can target with other types of therapy.

Lead author Kimberly A. Coughlan, along with Bella S. Sudit, Katherine Allen, Neil B. Ruderman and Asish K. Saha, all at Boston University School of Medicine; as well as Yossi Dagon and Barbara B. Kahn, both at Harvard Medical School, contributed to this research. The study was supported by grants from U.S. Public Health Services, National Institutes of Health and the JPB Foundation.

A recent discovery made by an Iowa State University professor and a team of researchers holds promise for those who are obese or diabetic and do not benefit from medications to regulate their glucose and insulin levels.

“There are probably a lot of different molecules that are also involved in this process, but this is definitely one of the mechanisms by which the molecule AMPK is downregulated.”