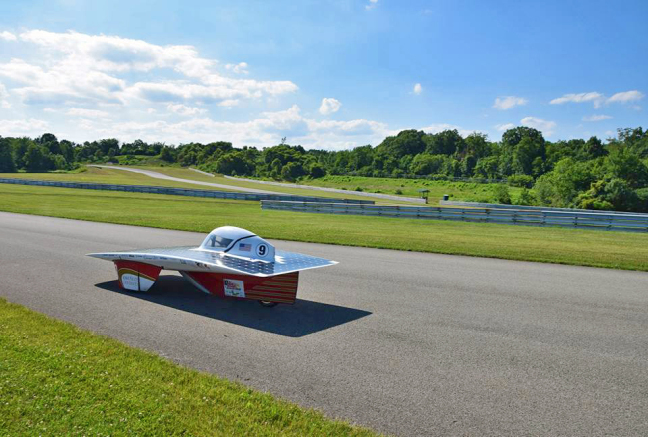 AMES, Iowa – Over and over, the drivers and student-engineers of Team PrISUm tried to pass a brake test necessary to compete in the Formula Sun Grand Prix.

Over 300 attempts, the team and its solar racing car couldn’t stop in time.

They showed their statistics to the judges: It wasn’t the driver. It wasn’t the car. And it wasn’t only Team PrISUm – other university teams were having problems with the brake test. The students argued it was a slippery road surface.

(Or, as Matt Goode, the team’s project director who’s a senior in materials science and engineering from Coggon, put it: it was all about “the road surface coefficient of friction.”)

The students and their data convinced the judges, who eventually allowed Team PrISUm and other teams to join the qualifying race at the Pittsburgh International Race Complex – with a penalty. Those teams will be assessed a 5 minute penalty during each day of racing.

Once the team hit the track, it churned lap after lap: 241 over three days, even with a bit of rain, a loose wire and problems with low speeds because the voltage from the battery pack was too low.

That was more than enough to qualify for the summer’s big solar car race: the American Solar Challenge, eight days and 1,800 miles of racing from Cuyahoga Valley National Park in Brecksville, Ohio, to Wind Cave National Park in Hot Springs, South Dakota. The race starts Saturday, July 30, and ends Aug. 6.

Team members responded to their speed problem with an all-nighter to install what they dubbed a “turboencabulator,” a voltage booster developed with some assistance from engineers at Rockwell Collins.

The next day – after clearing another round of inspections and waiting for rain clouds to pass by – the team hit the accelerator of its car, Phaëton 2.

“We started doing hot laps,” Goode said. “That was so cool.”

He said other teams noticed the speed and started banging the guard rails in appreciation.

And so, even though the team finished ninth of 11 qualifying cars, Goode said team members met the challenges of solving problems, making improvements and proving new systems.

“If anything, they’ll make people think we’re not going to do too well,” he said. “But I’m hoping to prove them wrong.”

There were challenges, but Team PrISUm and its solar racing car turned enough laps at the Formula Sun Grand Prix to qualify for the American Solar Challenge. The eight-day, 1,800 mile race begins Saturday, July 30, and runs from Ohio to South Dakota.

“We started doing hot laps. That was so cool.”

Here are the top qualifiers for the American Solar Challenge: