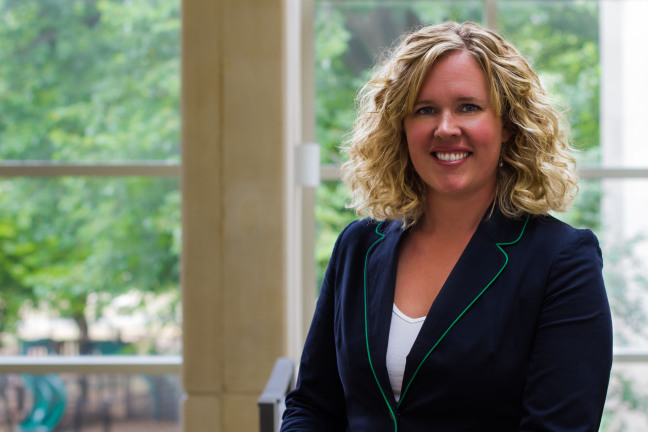 AMES, Iowa – In the movie “The Parent Trap,” twin sisters meet at a summer camp and plot to reunite their divorced parents. It’s an unlikely scheme that works in the movies, but new research shows it’s not so uncommon for fathers to come back after a separation – even without their children intervening – which can be beneficial for their daughters.

It’s called “boomerang fathering” – a term that Cassandra Dorius, an assistant professor of human development and family studies at Iowa State University, and her colleagues coined after detecting this pattern while studying how families change. Dorius says the concept of relationship “churning” – a cycle of breaking up and getting back together – is common among young adults, but they were surprised to find it happens with married and co-habiting couples well into middle age.

The discovery led researchers to further examine how boomerang fathers affect their children. In a paper published in the Journal of Marriage and Family, Dorius and Daphne Hernandez, lead author and an assistant professor at the University of Houston; and Emily Pressler, a postdoctoral research associate at New York University, found boomerang fathers lowered the risk of depression for their daughters. But the father’s return had no effect on sons.

“This is good news for kids. We’re finding a new way that families might support their children. Even though the family has gone through some really bad times, having the dad come back has proven to be positive,” Dorius said.

“You can imagine the ups and downs these children go through. Research shows children often experience a range of problems when their parents’ relationship ends and the father moves out. What no one really knew was whether the father moving back in would make things better, or if the damage had already been done. We find that for girls, depression rates are significantly lower when dads move back in. And these ups and downs might just cancel each other out for boys.”

Researchers used data from the National Longitudinal Survey of Youth and examined a sample of 3,366 women and 3,731 adolescents born between 1978 and 1992. They looked at children in all relationship transitions from birth to age 18 and then measured depression in early adulthood. About a third of the adolescents in the study had their biological father move out of the home, Dorius said. Of that number, 15 percent – or 5 percent of the total sample – had dads return home.

In boomerang families, adolescents experienced an average of three parent relationship transitions. For example, dad leaving the home would count as one transition. Researchers found the total number of transitions did not change the risk for depression. A majority of boomerang fathers were living in the home at the time the child turned 18.

"Although the relationship between the biological father and mother may be complex there is a commitment to the child by the boomerang father that creates a bond between father and child," Hernandez said.

Researchers know that teenage girls are twice as likely to experience depression than boys their age, and that family stability during adolescence is crucial for child development. Identifying and limiting risks for depression increases the likelihood that adolescents will do better in school, have higher self-esteem and fewer behavioral problems, such as alcohol and substance abuse.

In the study, researchers identified four categories (stable, unstable, not present and boomerang) that described the biological father’s presence in the home. Most mothers in boomerang relationships were not married when their child was born. They also had lower levels of education and were more likely to live in poverty, compared to stable and unstable households.

In the paper, researchers noted that there was no significant difference in depression levels between teens who lived with a boomerang father and those who lived with their biological father from birth to 18. While boomerang fathering causes disruptions and instability for the family, Dorius says it also limits exposure to other men entering the house (59 percent of adolescents in boomerang households never lived with a stepfather or other father figure) who may not be as invested in the children.

“Men provide more time and money for their children when they are the biological dads, but they tend to give less after mothers move in with someone new. We think this may be what’s really driving these results,” Dorius said. “Boomerang dads may be staying closer and providing more resources to their children, and their presence blocks other men from moving in, which may keep these resources higher for longer. This may be one of the key ways they help their children overcome the issues that arose with the disruptions, the reformations and instability.”

The research has generated several questions that Dorius hopes to answer with future studies. For example, she wants to know if children at various ages respond differently to dad leaving and later returning to the home. Given the instability in modern families, Dorius says it is important to understand what these transitions mean for children.

Children often experience a range of problems when their parents’ relationship ends and the father moves out of the home. But new research shows that fathers who leave and come back – also known as boomerang dads – lower the risk of depression for their daughters.

“This is good news for kids. We’re finding a new way that families might support their children. Even though the family has gone through some really bad times, having the dad come back has proven to be positive.”