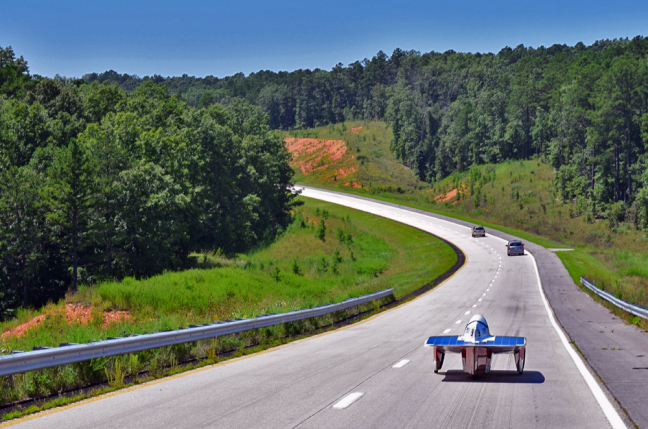 AMES, Iowa – Finally. A drama-free day on the road for Team PrISUm.

Sure, there were a few issues – a flat tire early in the day, a loose connection that took about 30 minutes to track down and big trucks that passed hold-your-breath close to the little solar car.

But those issues were nothing like the last few days of the American Solar Challenge, an eight-day, nearly 2,000-mile, cross-country race for student-built solar cars. Team PrISUm has survived a wheel in the ditch, a battery pack losing its charge, a power board going down, a charging system blowing up and more challenges along the way.

But not on Wednesday.

“It was a boring day,” said Matt Goode, the team’s project director. “If you have a boring day of racing that is one of the best things that can happen.”

At the end of the day, the team was comfortably camped at the day’s checkpoint, the Brown v. Board of Education National Historic Site in Topeka, Kansas. Team PrISUm was the 10th of the race’s 13 teams to arrive at the checkpoint.

This year’s version of the race is marking the centennial of the National Park Service by stopping at national parks and historic sites.

At the Topeka site, Iowa State’s solar racers have some good company. Parked nearby are teams from the University of Minnesota, the École de technologie supérieure of Québec, Polytechnique Montréal and Illinois State.

“We’re all getting about the same times and the same speeds,” said Goode, a senior from Coggon who’s majoring in materials science and engineering. “We’re passing each other on the highway. It’s a pretty friendly competition.”

On Thursday, the team heads for the Homestead National Monument of America in Beatrice, Nebraska. Thunderstorms are forecast for the morning, so that could affect the teams’ morning charging session and slow the solar cars on the road.

But that’s tomorrow’s problem. Speaking in the middle of the evening charging session, with the sun still shining and the car’s solar array soaking up power, Goode said, “It was a real good day.”

Team PrISUm had a good day of solar racing into Topeka, Kansas. The team had few problems and kept even with Minnesota, Illinois State and two teams from Canada. Next is a drive up to Nebraska, but thunderstorms could cause problems for the teams.

“It was a boring day. If you have a boring day of racing that is one of the best things that can happen.”