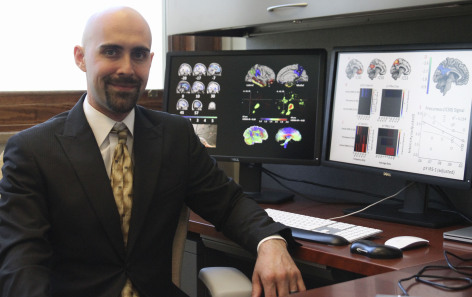 AMES, Iowa – Iowa State University researchers have identified a protein essential for building memories that appears to predict the progression of memory loss and brain atrophy in Alzheimer’s patients.

Auriel Willette, an assistant professor of food science and human nutrition; and Ashley Swanson, a graduate research assistant, say the findings also suggest there is a link between brain activity and the presence of the protein neuronal pentraxin-2, or NPTX2. The research, published in the journal Brain, Behavior and Immunity, found a correlation between higher levels of NPTX2 and better memory and more brain volume. Lower levels of the protein were associated with diminished memory and less volume.

“NPTX2 seems to exert a protective effect,” Swanson said. “The more you have, the less brain atrophy and better memory you have over time.”

The discovery is encouraging as it offers an avenue to track the progression of Alzheimer’s disease over time, but it also generates a lot of questions. Researchers want to know how best to boost NPTX2 levels and if there is an added benefit. They were struck by a trend in the data that points to a possible answer. Study participants with more years of education showed higher levels of the protein. Willette says people with complex jobs or who stay mentally and socially active could see similar benefits, supporting the notion of “use it or lose it.”

“You’re keeping the machinery going,” Willette said. “It makes sense that the more time spent intensely focused on learning, the more your brain is trained to process information and that doesn’t go away. That intense kind of learning seems to make your brain stronger.”

Willette and Swanson used data from the Alzheimer’s Disease Neuroimaging Initiative to assess which aspects of the immune system were most relevant to tracking Alzheimer’s disease progression. They consistently found two proteins (NPTX2 and Chitinase-3-like-protein-1, or C3LP1) that predicted aspects of the disease. Among 285 older adults, they examined memory performance at baseline, six months, one year and two years. At the beginning of the study, 86 participants had normal brain function, 135 expressed mild cognitive impairment (the precursor to Alzheimer’s), and 64 had Alzheimer’s disease.

Willette and Swanson say they were somewhat surprised by the comparative results. They expected C3LP1, which causes brain inflammation and is thought to degrade the brain and memory, to be a stronger indicator. However, the memory forming benefits of NPTX2 proved to be consistently significant during the two years that researchers tracked memory decline and medial temporal lobe atrophy.

“We see this as a promising biomarker that affects a lot of key aspects of Alzheimer’s disease,” Swanson said. “It’s a revolutionary approach and we’re looking at it in a more holistic way, rather than a reductionist viewpoint, to understand how the immune system and brain are connected.”

Willette added, “With this disease you have to be comprehensive. There are so many aspects of our environment, our lifestyle, our immune system that influence the degree to which you’re at risk for Alzheimer’s disease.”

Iowa State University researchers have identified a protein essential for building memories that appears to predict the progression of memory loss and brain atrophy in Alzheimer’s patients. Their findings suggest there is a link between brain activity and the presence of this protein. 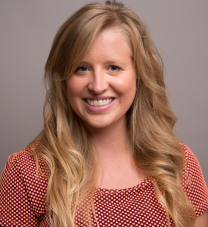 “NPTX2 seems to exert a protective effect. The more you have, the less brain atrophy and better memory you have over time.”