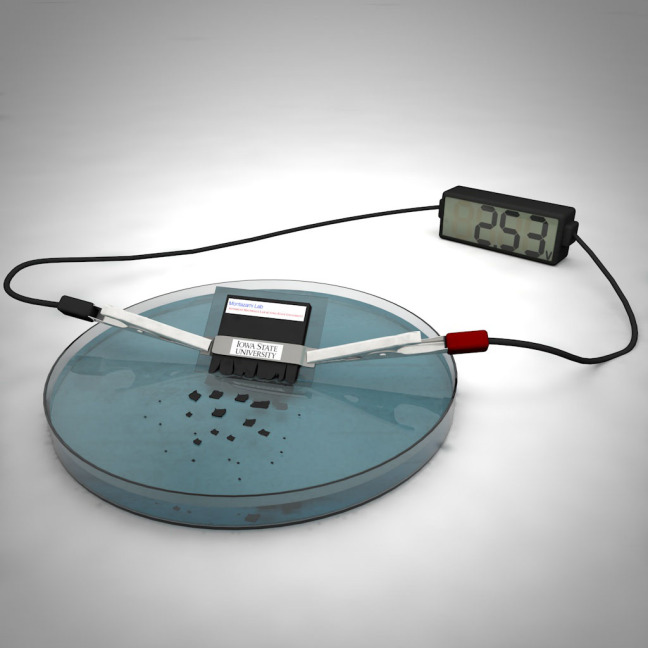 AMES, Iowa – Self-destructing electronic devices could keep military secrets out of enemy hands. Or they could save patients the pain of removing a medical device. Or, they could allow environmental sensors to wash away in the rain.

Making such devices possible is the goal of a relatively new field of study called “transient electronics.” These transient devices could perform a variety of functions – until exposure to light, heat or liquid triggers their destruction.

Reza Montazami, an Iowa State University assistant professor of mechanical engineering and an associate of the U.S. Department of Energy’s Ames Laboratory, has been working on transient technology for years. The latest development from his lab is a self-destructing, lithium-ion battery capable of delivering 2.5 volts and dissolving or dissipating in 30 minutes when dropped in water. The battery can power a desktop calculator for about 15 minutes.

Montazami said it’s the first transient battery to demonstrate the power, stability and shelf life for practical use. 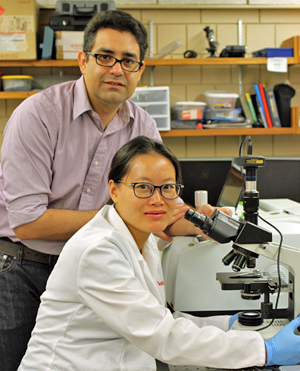 Montazami and his team recently published their discovery in the Journal of Polymer Science, Part B: Polymer Physics.

Development of the transient battery was supported by funding from Iowa State’s Presidential Initiative for Interdisciplinary Research and the department of mechanical engineering.

“Unlike conventional electronics that are designed to last for extensive periods of time, a key and unique attribute of transient electronics is to operate over a typically short and well-defined period, and undergo fast and, ideally, complete self-deconstruction and vanish when transiency is triggered,” the scientists wrote in their paper.

And what about a transient device that depends on a standard battery?

“Any device without a transient power source isn’t really transient,” Montazami said. “This is a battery with all the working components. It’s much more complex than our previous work with transient electronics.”

Montazami’s previous, proof-of-concept project involved electronics printed on a single layer of a degradable polymer composite. The transient battery is made up of eight layers, including an anode, a cathode and the electrolyte separator, all wrapped up in two layers of a polyvinyl alcohol-based polymer.

The battery itself is tiny – about 1 millimeter thick, 5 millimeters long and 6 millimeters wide. Montazami said the battery components, structure and electrochemical reactions are all very close to commercially developed battery technology.

But, when you drop it in water, the polymer casing swells, breaks apart the electrodes and dissolves away. Montazami is quick to say the battery doesn’t completely disappear. The battery contains nanoparticles that don’t degrade, but they do disperse as the battery’s casing breaks the electrodes apart.

He calls that “physical-chemical hybrid transiency.”

And what about applications that require a longer-lasting charge? Larger batteries with higher capacities could provide more power, but they also take longer to self-destruct, according to the scientists’ paper. The paper suggests applications requiring higher power levels could be connected to several smaller batteries.

Even though batteries are tried-and-tested technology, Montazami said the transient battery project presented three major challenges for his research group.

First, he said the battery had to produce voltage similar to commercial batteries because many devices won’t operate if voltage is low or unsteady. Second, the batteries require multiple layers and a complex structure. And third, fabricating the batteries was difficult and took repeated attempts.

And what kept the group working through all that?

“The materials science part of this,” Montazami said. “This is a challenging materials problem, and there are not many groups working on similar projects.”

Reza Montazami and his research group have developed a working battery that self-destructs in water. It's part of a field of study called "transient electronics." Montazami said the battery project presented many challenges, including a complex structure and difficulties in fabrication. The team's findings were recently published in a polymer physics journal.

“Any device without a transient power source isn’t really transient. This is a battery with all the working components. It’s much more complex than our previous work with transient electronics.”

Reza Montazami, an Iowa State University assistant professor of mechanical engineering and an associate of the U.S. Department of Energy’s Ames Laboratory