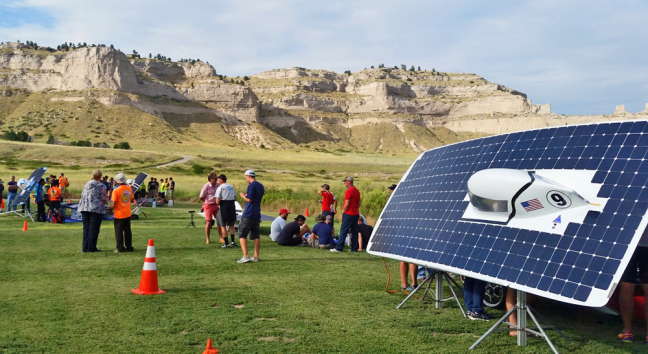 AMES, Iowa – As the students of Team PrISUm studied the weather data, it looked like a cloud shaped exactly like Nebraska – panhandle and all – had settled over the state.

There was sunshine to the north, east, south and west. But not overhead as the team made its way from Grand Island to Scotts Bluff National Monument way out west.

That’s 330 miles. It would take perfect sun conditions to make it all the way. And that just wasn’t happening, said Matt Goode, the team’s project director.

So Team PrISUm cruised along at 35 mph, trying to get as far as possible during day seven of the American Solar Challenge.

The challenge is an eight-day, nearly 2,000-mile race from Ohio to South Dakota for student-built solar cars. This year’s race is celebrating the centennial of the National Park Service by stopping in national parks and historic sites along the way.

By early afternoon, the battery pack in Team PrISUm’s car, Phaëton 2, was draining and the car’s speed was dropping to 30 mph.

So, with about 160 miles to go, the team decided it was time to call it a day and load the car into a trailer and drive to Scotts Bluff and the finish line of the race’s third stage.

“We could have gone farther,” said Goode, a senior from Coggon who’s studying materials science and engineering. “But that could drop the battery pack down to 0 percent and we didn’t want to risk it. We knew we wouldn’t be the only team that had to do this, so we decided to trailer in and get a good charge in the pack.”

When the team arrived, Goode said everybody enjoyed the huge views of the rocky, weathered bluff rising 800 feet above the North Platte River. But they would have liked more sunshine, too.

“It’s been a pretty cloudy solar challenge,” he said.

There’s only one day left – about 160 miles to Wind Cave National Park in Hot Springs, South Dakota. And team members plan to exhaust their car’s resources to get there.

“When we pull in there,” Goode said, “the plan is to have 0 percent in the battery pack. That means we’ve run a good race.”

Team PrISUm -- as did some of its competitors -- struggled to make speed and distance under Nebraska's cloudy skies on Friday. The team made it more than halfway to the day's stage stop, but was at risk of draining Phaëton 2's battery pack. So the team's students loaded up the car and hauled it the rest of the way. The eight-day race ends Saturday at Wind Cave National Park in South Dakota.

“When we pull in there, the plan is to have 0 percent in the battery pack. That means we’ve run a good race.”