AMES, Iowa -- Iowa State will host a screening of "Project Enye (ñ): A Voice for First–Generation Latinos between Two Worlds" and a discussion with the filmmaker as part of the university's Latino Heritage Month activities.

The presentation will be at 7 p.m. Thursday, Oct. 13, in the Memorial Union Great Hall. First-time Latina filmmaker Denise Soler Cox will present opening comments, and a Q & A with the audience will follow the 37-minute documentary. The event is free and open to the public.

In the film, Soler Cox draws on her personal struggles growing up between two cultures to chronicle the shared experiences of 16 million first-generation American-born Latinos, or Enyes (ñs). Raised in a household with at least one parent from a Spanish-speaking country, Enyes (ñs) often grow up wrestling with issues of identity. Their home culture reflects the heritage and traditions of the family’s country of origin and is often in conflict with mainstream American culture everywhere else. For Soler Cox, creating awareness of the shared Enye (ñ) experience, and giving it a name, generates a powerful sense of belonging for a population struggling to understand where they fit in.

In 2012, Soler Cox connected with Henry Ansbacher, a Denver-based Oscar-nominated filmmaker, and together they are sharing this cultural issue through Project Enye (ñ).

In addition to her work on the film, Soler Cox is a regular blog contributor to Huffington Post Latino and a syndicated content provider for AOL.com. She has been featured on several media outlets, including CNN Money, NBC News, Fox News Latino and Telemundo.

The presentation is co-sponsored by the Greenlee School of Journalism and Communication, the Latino Heritage Committee, Sigma Lambda Beta International Fraternity Inc. and the Committee on Lectures, which is funded by Student Government. More information is available online at ISU Lectures Program, or by calling 515-294-9935. 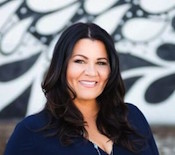