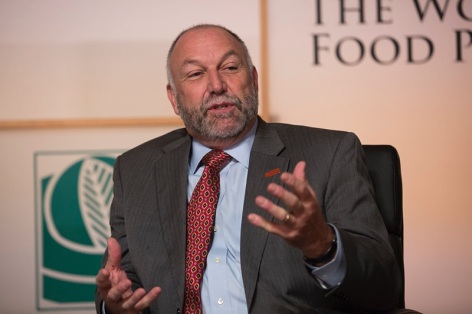 Leath said a strong, unified effort involving public and private universities, public agencies such as the U.S. Department of Agriculture and private companies is necessary to address the daunting problems of hunger, nutrition and world food supply.

“No one person, discipline, university or agency can alone address all of our major agricultural challenges,” Leath said, “We need to leverage each other’s talents and expertise.”

He cited as examples Iowa State’s role in the central Iowa Cultivation Corridor, a public-private partnership to spur discovery and growth in agricultural biosciences, biotechnology and related fields. He also cited partnerships within Iowa State, including an interdisciplinary research initiative he launched nearly five years ago.

Strong partnerships also are necessary to secure the level of federal research funding necessary to address major agricultural challenges. As he has noted in the past, Leath said medical research investment is $13 for every $1 devoted to agriculture.